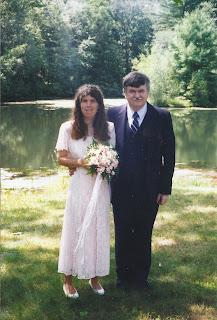 MY LIFE WITH COMIC BOOKS: THE HISTORY OF A COMIC SHOP-Part 185

One day, several months after Adam's death, we got a phone call from a woman we'd never met. She got our unlisted phone number from the Friendly's restaurant where Adam worked at the time of his accident. She was unsure that she should call us but as time passed she felt strongly that she needed to share this with us.

She has two very young, unruly children who do not know how to behave in a restaurant so they rarely went out to eat. This one night, though, they went to Friendly's and Adam was their waiter. She explained that Adam quickly realized that these two young girls were "out of control." He decided to pretend that he was an English butler and the two girls were princesses that he was serving. He draped a cloth over his arm, bowed to the princesses, and speaking in an English accent, took their orders.

His act continued as he hovered around their table while the girls ate, and they were quiet and well behaved in their "roles" as princesses. When the dinner was done, the woman asked Adam to introduce himself (the real Adam) and she said to her girls, "Remember this man, because someday we'll see him on TV!"

A few weeks later, the woman saw Adam's obituary in the paper. She was stunned. That night she sat her two little girls down and explained what had happened to the fun and talented waiter from Friendly's. They all cried together.

We really appreciated that this stranger took the time and effort to tell us this story of our son.

Ken Carson, the manager of our comic book-pop culture stores, enabled us to receive another gift. After Adam’s accident, many of our customers wanted to send us sympathy cards but Ken thought it would be even nicer to have customers share their thoughts by writing messages to us in a book. He put this out in the Worcester store and when it was full, he mailed it to us. We were surprised by the messages. We had opened our store with the intention of earning a living but the stores had become much more than that. Our customers had become friends. Many of our customers wrote about their memories of the times when our whole family worked at the special events we held at the store. They shared lots of memories about Adam, especially seeing him grow from a toddler to a teenager. Several customers told us how important the store was to them; thanking us for providing a positive, friendly place to come to, where collectors could gather and feel comfortable. I really treasure this book.

It was around this time that I received another gift. Somehow, word had gotten around the high school that Adam had attended that I had missed seeing Adam perform in his senior musical play, “Working.” (I had been very sick on the one night the full play was performed.) Pamela Griffin, the mother of one of the younger students in the play made a duplicate copy of her videotaping of the full show and she sent this to me! Watching this video of Adam certainly showed how much he loved to perform. What a wonderful and thoughtful gift for us to have!

I also got a small gift from my friend, Wendy Pendleton. Wendy was battling brain cancer but she packaged up this gift for me. It was a cassette tape of music by contemporary Christian singer, Steven Curtis Chapman. Wendy enclosed a short note saying, “I thought you might like this.”

Wendy married Ken Pendleton the same year Mal and I got married and even though we weren’t always good about staying in touch, we remained friends. Ken was a friendly and brilliant man who spent much of his adult life writing technical manuals. He also did some work for me writing role-playing game modules when I organized a big game convention in Worcester, Massachusetts. Wendy was a quiet, kind, and thoughtful woman who loved God and loved her family. Ken and Wendy had four children together.

Although I enjoyed a few of his songs that I’d heard, I was not really a “fan” of Steven Curtis Chapman. Wendy must have thought I needed to hear something on this tape. The songs included: Dive, Speechless, The Change, Great Expectations, Next Five Minutes, Fingerprints of God, The Invitation, Whatever, I Do Believe, What I Really Want to Say, With Hope, The Journey, and Be Still And Know.

I needed to do a few errands so I unwrapped the cassette tape and planned to listen to it in my car while I was driving to the store. It wouldn’t play. I tried fast-forwarding it but it still wouldn’t play. When I got home, I tried it in my stereo cassette player, but it still didn’t play. I tried forwarding it all of the way to the end and back but it wouldn’t work. I probably should have thrown it away but I left it on my desk to remind me to contact Wendy to thank her for the gift. (I’m mentioning this cassette tape for a reason that I’ll disclose later)

Picture: Ken and Wendy Pendleton
Posted by paul howley at 9:31 AM 4 comments: