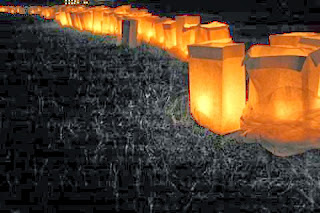 
MY LIFE WITH COMIC BOOKS: THE HISTORY OF A COMIC SHOP-Part 193


We survived our first Christmas without Adam but the dreaded anniversary of his accident was fast approaching. It seemed like every month there was some day or event that brought so much pain to us; Adam’s birthday, Mother’s Day, Father’s Day, Christmas, and even Halloween, brought back memories that made us miss Adam even more.


Mal suggested that instead of thinking of January 9th as the date of Adam’s death, we could consider it the beginning of the next chapter in his life in the presence of his Creator. We invited the friends we had in New Hampshire who knew Adam the most and they all confirmed that they’d come to “celebrate” this day as Adam’s first heavenly birthday.


Mal made food for the gathering (for some reason, almost every gathering in New Hampshire included food) and we had angel-food cake for dessert. She set up candles in paper bags and lined them up along the walkway. With all of the snow in the yard, it looked really nice.


When our friends arrived, we chit-chatted for awhile and then we sat around the family room to watch a video collection I had put together of bits and scenes from Adam’s life. It included video footage of Adam from early childhood to a few days before his accident. We read a few of Adam’s poems and read some verses in the Bible that referred to the after-life that we expect. It was an emotional evening for us but it helped us through a very tough “anniversary.”


We’ve had a gathering of friends on January 9th with us almost every year since then (I’m writing this about twelve years later) but instead of inviting close friends and relatives who actually knew Adam, we’ve tried to invite new friends who had never personally known him. This gives us the opportunity to give our new friends a glimpse of what Adam was all about. It’s not an easy night for us, but it helps.