A brief introduction:
My name is Paul Howley, owner of the Eisner Award winning pop culture collector’s store known as “That’s Entertainment” in Worcester, Massachusetts and a second store in Fitchburg, Massachusetts. Some people have called me the “luckiest man in the comic book business.” (I’m not) My stores have been around for over thirty years and it’s been a long and interesting combination of events and people that have brought these stores to this current place. It is not my intent to boast or brag about my store or my life. I just want to tell you my story. In many instances, my wife remembers things a little differently, but this is the truth as I remember it.

MY LIFE WITH COMIC BOOKS: THE HISTORY OF A COMIC SHOP-Part 194

In March of 2002, Brenda, the drama teacher at my daughter’s school, chose to put on a musical play titled, “The Truth About Cinderella.” I had never heard of this play but it didn’t matter because I wasn’t very involved in this production. I wasn’t needed to help with the preparation in any way so my only involvement was to oversee the ticket sales. I was no longer on the school board but I was very busy organizing my daughter’s senior class trip. The class had chosen to go on a cruise and for the past three and a half years they were saving their money so that they could afford to go on this trip. We had been raising money by running the concession stand at nearly every home sporting event and we had a very successful “Family Fun Night” at the school that had a meatball sandwich dinner, a live auction of donated items, and live musical entertainment provided by members of the senior class. The event raised several thousand dollars and the money was evenly split up among the senior students to make the cruise more affordable.

With twenty-three students going on this trip, I knew we’d need lots of adult chaperones to be sure everyone obeyed the “rules” (although this group of students was abnormally well-behaved!) and to keep everyone safe. We put out the word that we were looking for responsible adults to come on this cruise and, even though they had to pay for their cruise and all of their own travel arrangements, we had more than enough adults step forward to come along! We ended up with eleven chaperones; enough for at least one adult per cabin.

As the departure date for the class trip neared, I needed to make arrangements for all of the different modes of travel including: cars, bus, planes, and the cruise ship. We also investigated the kinds of activities and tours we wanted the students to have a chance to experience.

The morning of our trip, we left the Laconia, New Hampshire area very early in the morning. We arrived at the US Airways terminal at the Manchester airport nearly two hours before the scheduled time of our flight’s departure. When we got to the check-in desk we were surprised that it was not open for business yet. By the time the US Air employee arrived, we only had about an hour to get everyone checked in. The rude and snippy employee seemed to be deliberately moving very slowly and the check-in process was taking far too long. When I went to the head of the line and asked him what was taking so long, he informed me (rudely) that there was a good chance he wouldn’t have time to get everyone checked in! After I (probably rudely) suggested that since we were all here very early, and US Airways should have known how many people were booked on this flight, perhaps the company should have had adequate help here.  Not surprisingly, this seemed to make him move even slower. By the time the last student was checked in, many of us had to actually run to our gate to board the plane before it took off! We felt bad for the dozens of passengers that were still left in the line with the slow, rude employee.

Interestingly, several of the students had never flown on an airplane before. Some had not ever travelled outside of New England. It was an uneventful flight and the time passed quickly because most of the students were excited about the trip and they were enjoying the opportunity to spend this time together. Once we landed, we were struck by the warmth of the Florida sun. It was a nice change from the normal chill of New Hampshire. We all boarded the Carnival Cruiseline bus and headed for the Port of Miami where the Carnival Fascination ship was docked. Most of the people in our group had not been on a cruise before so they were surprised at how huge the ship really was. The Fascination was built in 1994 so it was still in almost brand-new condition. The ship was 855 feet long and 10 stories tall and it would have 2600 passengers and nearly 1000 crew members.

It took a while for the large group of us to get checked-in at the Carnival Cruiselines and when we were done, we all headed to the Lido Deck buffet. 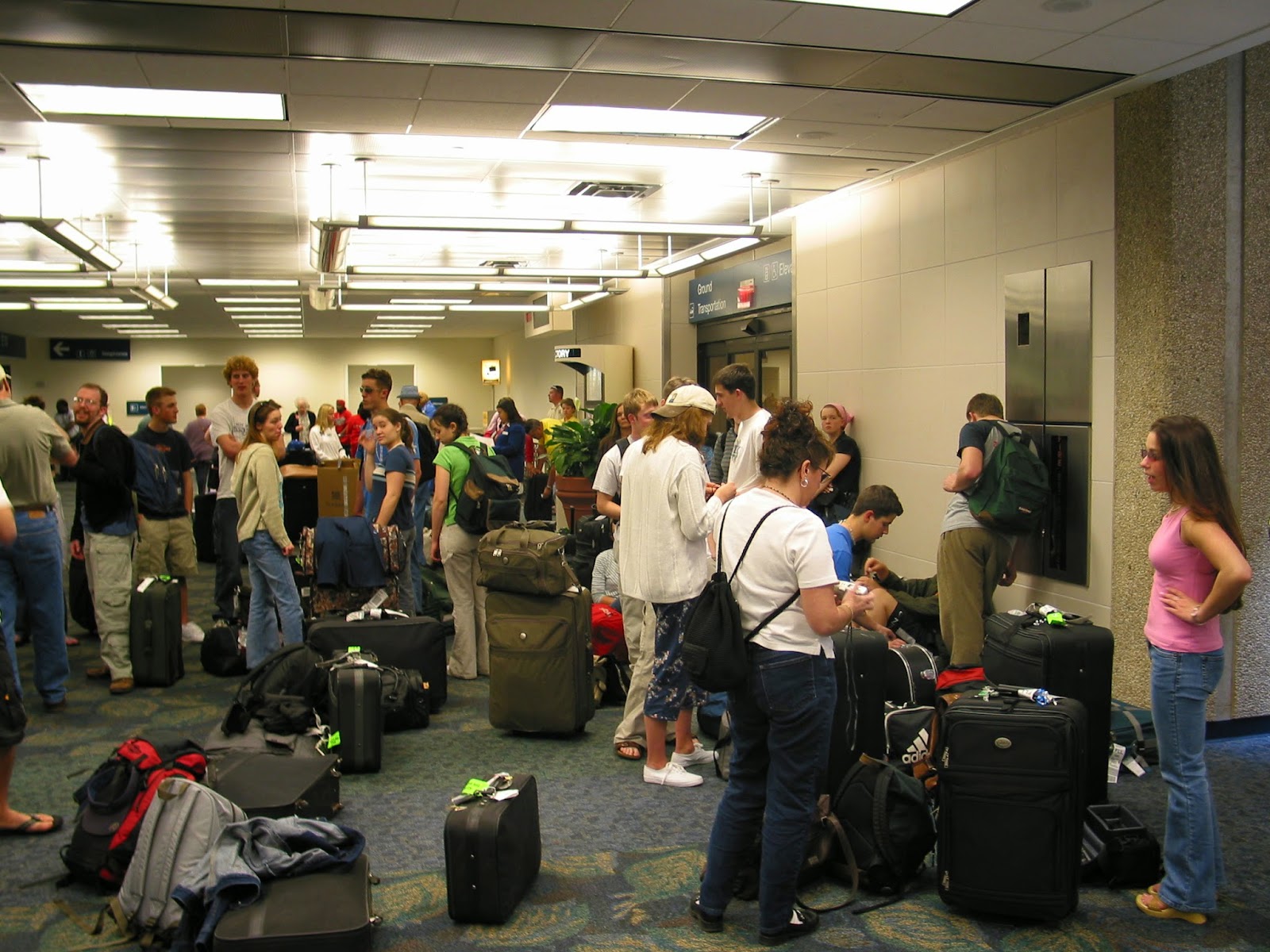 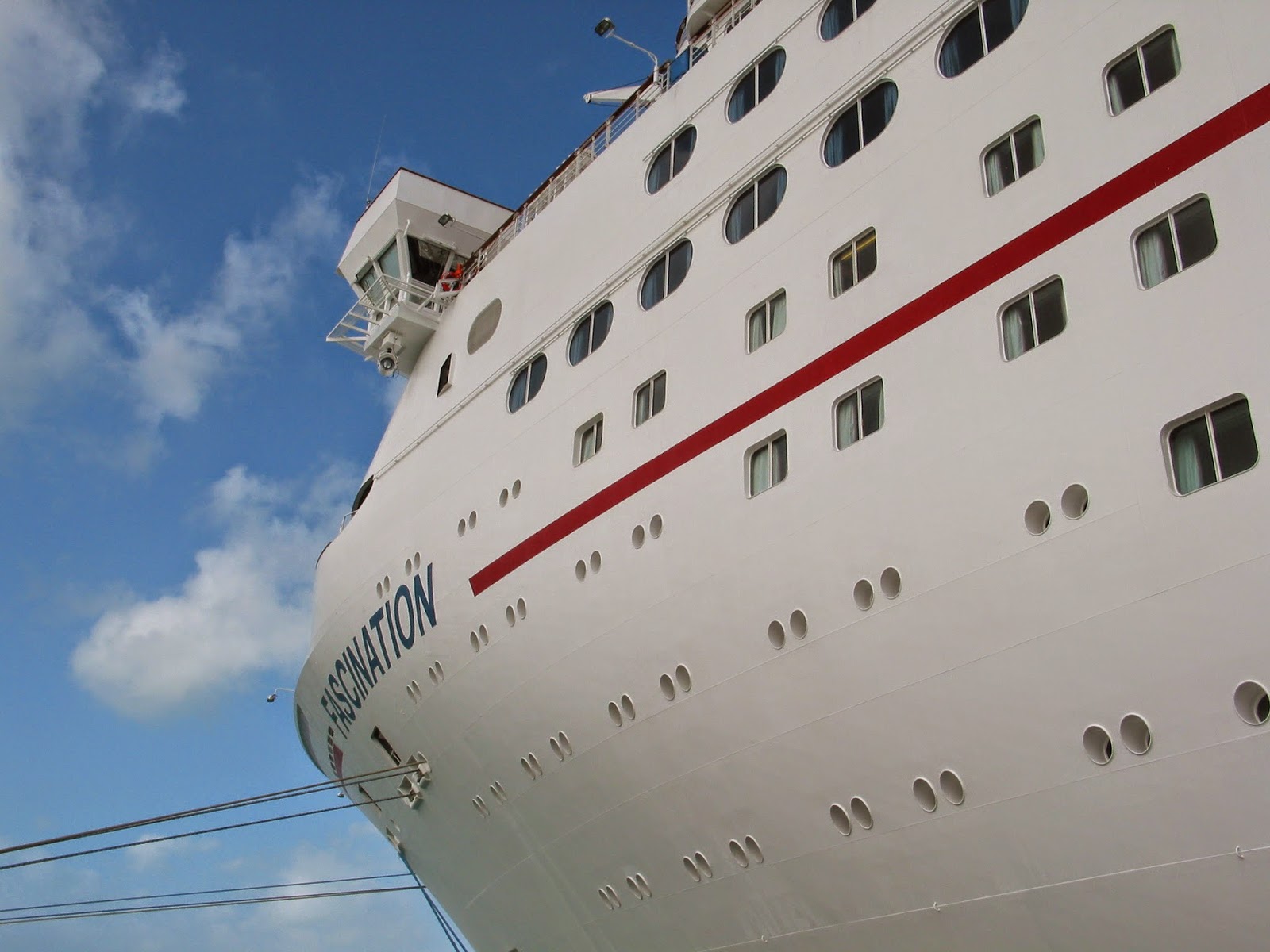