The Current Cast of Characters:


We were all packed up and ready to begin our trip to move into our newly purchased home in Florida. My sister Sharon and her youngest son Jake drove our Toyota Camry packed with stuff and Cassandra, Mal and I rode in Cassy’s Toyota Highlander packed with more stuff. We left our other car parked at our Alton Bay, New Hampshire home. We’d somehow get it down to Florida some other time. We didn’t all own cell-phones at that time and those who did have them were on restrictive monthly plans with limited minutes available. So, I bought a set of Motorola Walkie-Talkies so we could communicate between the two cars. We stopped for the night after we had driven about ten hours.


The next day we had a total of fourteen hours to go before we reached our new home. I remember how excited I was as we left Georgia and entered Florida. It was the beginning of a new chapter of our lives. A new place and new people.


The long ride went smoothly but it was getting dark by the time we arrived in Jupiter, Florida. We had no furniture or beds so we went to a local Wal-Mart and bought some sheets and towels and all just slept on air-mattresses on the floor. Our furniture and household items were scheduled to be delivered by the moving company sometime the next day.


The next morning, we got a call from the moving company. The driver would be arriving at our property early that day. I explained to him that there was no way he’d be able to drive into our property in a forty-foot long tractor trailer truck so he’d need to park on the road and carry everything about fifty feet to our home. He told me that he only had his fifteen-year-old nephew with him to help carry our stuff. I expressed my “displeasure” with his unprofessional planning and urged him to somehow find additional help. My contract with the moving company did not require ME to help unload the truck. A couple of hours later he arrived with some “day laborers” that he found from a nearby prison program. These two guys worked very hard on a very hot and humid summer day in South Florida and I was pretty upset when I found out that the moving company driver was only paying them each twenty dollars for their hard work! (When the work was done I gave them each fifty dollars and apologized to them for the terrible treatment by the moving company driver.)


Around noon, our elderly neighbor, Anne, came by to meet us and she generously brought us pizzas, soda, paper towels, toilet paper and more! What a thoughtful lady!


We spent several days unpacking our stuff but we really didn’t have much furniture….just a couch, some chairs, a huge desk, and a few other small pieces. My sister was a big help because she kept urging us to keep working. We did take some short breaks to go to the ocean beach that was only six miles from our new home. Swimming in the ocean in South Florida was very different than swimming in the ocean in New England. Instead of freezing-cold ocean water, the temperature of the water at this beach was in the mid-80s! On one of these visits to the Jupiter Beach, my daughter Cassandra and her cousin Jake asked a lifeguard if there were sharks in the water. He laughed and said, “Of course there’s sharks! This is where they live!” It didn’t stop us from enjoying the beautiful ocean though!


After Sharon and Jake flew back home to New Hampshire, Cassandra started her first year of college at Palm Beach Atlantic University. She immediately immersed herself into the many activities available at the school along with her college courses and theatre productions. She joined the competitive college cheerleading squad and spent hours each week practicing. On the other hand, other than shopping for furniture, Mal and I had very little to keep us busy. We really only knew Anne (the nice lady across the street) but she rarely came out of her home.


We spent some time each week shopping for furniture and other stuff we wanted for this home. We had three bedrooms, a family room, and a dining room in our “main” house to furnish and the guest house needed furniture for the bedroom, dining room and family room. We also needed pool furniture and a table and chairs for the outside area of the covered patio. But, as those of you who really know me will understand, I was more concerned with buying televisions for the house and getting our cable hooked up. Adelphia Cable (the now out-of-business cable company) couldn’t get our cable turned on for a couple of weeks and we had to have a TV available for them to establish the connection. We went to Circuit City (the now out-of-business electronics store) and inquired about the new JVC “flat screen” television. This TV was one of the first televisions to change from the rounded tubes to a flat screen. It was still a cathode-ray television and it was huge. I asked the sales clerk how much the TV weighed and he estimated that it weighed about 100 pounds. I bought the TV and the clerk said he’d bring it out to the front of the store while I went to get my Toyota Camry. When I pulled up to the front of the store it was clear that the box was far too big to fit in the car so we unpacked the TV and with the clerks help we struggled to fit it into the back seat. Mal had to get in the back seat and push down on the seat so the TV would just barely fit. The TV weighed about 200 pounds. We carefully drove home with the TV in the back but when we arrived home we found that we couldn’t safely get the huge, heavy television out of the car. It was too heavy and awkwardly sized for me to carry alone and Mal couldn’t help carry it. Eventually, we moved a plastic storage bin next to the car and worked at sliding the TV out of the back seat onto the top of the bin. The problem was, we didn’t know anyone in the area that could help us move this heavy television. It sat in the garage, balanced on the top of the bin, for a couple of weeks until the cable-guy arrived. It’s a strange thing to know no one around you!

Picture: Sharks near the shore at the Jupiter, Florida beach! 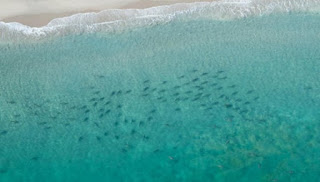