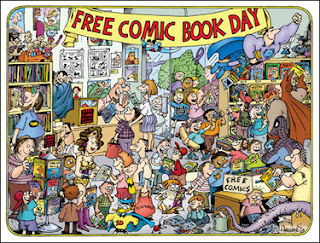 MY LIFE WITH COMIC BOOKS: THE HISTORY OF A COMIC SHOP--Part 198

Our collectible stores were gearing up for two huge events; the special screening and ticket-giveaway for the Spider-Man movie and the very first “Free Comic Book Day.” Free Comic Book Day was conceived by Joe Fields, a comic book retailer, who thought that it would be beneficial for the comic book industry to band-together to promote the comic book art-form. Since this was going to be the first Free Comic Book Day, we had no idea what to expect but we did the best we could to purchase the kind of comic books that might encourage people to try reading some! (Contrary to what many people think, although we give the comic books away for free, we PAY for them all.)

Dave and Ken wrote the following text to inform the media about the event:

That’s Entertainment celebrates an American art-form with free comics for everyone!

On Saturday, May 4th, That’s Entertainment at 244 Park Avenue in Worcester will be giving everyone who visits a free comic book---with no purchase necessary.

Why? That’s Entertainment is one of over 2000 comic book shops worldwide participating in “Free Comic Book Day.”

“The goal of Free Comic Book Day,” said David Hartwell, assistant manager of That’s Entertainment, “is to introduce, or re-introduce everyone to the joys of comic books.”

“Comic books are an original American art-form created in the depression era as affordable entertainment for the masses,” Hartwell continued. “In the decades since, comics’ unique blend of words and pictures has grown, matured, and changed with the times, while providing us with some of the most enduring characters and stories in our popular culture. Also, comics have been an idea-factory for Hollywood---Superman, Batman, The Crow, Spawn, X-Men, Ghost World, and now Spider-Man.”

Over the course of Free Comic Book Day, participating stores will give away close to two million comic books, ranging in subject matter from high-flying super-hero adventures to intense slice-of-life to crime noir to kid-friendly humor and more. Visitors to That’s Entertainment on May 4th will find a variety of free comics to choose from, including ‘Star Wars Tales,’ ‘Justice League Adventures,’ ‘Tomb Raider,’ ‘Ultimate Spider-Man,’ and many more.

Hartwell went on to explain why May 4th was chosen as the date for Free Comic Book Day. “With the Spider-Man movie opening the day before, public awareness of comic books will be high and we think Free Comic Book Day will build on that momentum.”

“We’re also bringing in some comic artists to the store just to make the day even more special,” said Hartwell. “Paul Ryan, who has drawn the Spider-Man comic strip, as well as dozens of other major characters, will be here to chat with fans and sign copies of his work. We’ll also host creators Andy Fish, Tony Antetomaso, and Scott Hamilton, who will all give demonstrations on how comic books are created. It’s called ‘The Pro-Am Comic Jam.’ The creators will be on hand from 3PM until 6PM.”

“Along with our fellow comic book retailers around the world, we at That’s Entertainment want to spread the word that comics are alive and well in 2002,” Hartwell continued. “That’s Entertainment is one of the largest comic stores in the country, with about 10,000 square feet of display area and we’ve won the industry’s national retailing award. We invite everyone to come to That’s Entertainment on May 4th and see for themselves how vital, relevant, powerful, and just-plain cool comic books are. Best of all, they’re FREE---and we hope to give away a lot of comics!”

My Life With Comic Books: Part 197 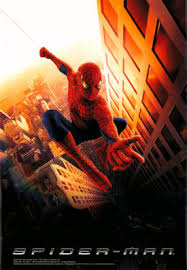 MY LIFE WITH COMIC BOOKS: THE HISTORY OF A COMIC SHOP-Part 197

In early 2002 we began to think about how we could make a fun event around the upcoming movie release of Spider-Man starring Tobey Maguire. The movie seemed like it could be a fun feature-film so we contacted the theater management of the Worcester Showcase Cinema to see if we could have the Massachusetts premiere in Worcester. We had such a memorable event way back in 1989 when we bought out an entire show for Tim Burton’s Batman movie and gave away 500 tickets to customers of our store and we hoped to do it again with Spider-Man.

After several frustrating phone calls with the new management, it became clear they didn’t understand how big an event the premiere could be for the city of Worcester. It would be easier for them to let the premiere happen in Boston.

Sony Pictures, the studio producing the movie, was clever to release the film on the same day as “Free Comic Book Day,” a brand-new national event celebrating comic books at comic book stores. We knew this could be a huge opportunity to educate consumers about how fun comic books can be. We negotiated with the Showcase Cinema people until we had the best deal we thought we could get. We ended up buying 500 tickets for a 9AM special screening at nearly 2 ½ times what we paid for the Batman tickets! This would NOT be a cheap event but we were excited to offer a “free” fun day as a “thank you” for our loyal customers.

Ken and David worked out most of the details because I was still living in New Hampshire. They lined up several comic book artists who agreed to create free sketches for customers who attended the Free Comic Book Day store activities after the movie. Ken contacted our friend Hank, a local radio celebrity, and arranged for two of the local Worcester radio stations to get involved in promoting the event. In late April of 2002, Ken sent out the information to the local press and media outlets. This is what he wrote:

“That’s Entertainment of 244 Park Avenue in Worcester will give away 500 tickets to a special free screening of the new Spider-Man movie. Paul Howley, owner of That’s Entertainment sees the event as a way to show his appreciation to the people who have been his customers over the past twenty years. A long-time Spider-Man fan, Howley looks forward to seeing the movie with a whole theater full of Spider-Man enthusiasts.

“The giveaway will begin at 10:00am on Saturday, April 27, at 244 Park Avenue, and tickets will be given away on a ‘first-come, first-served’ basis, one per person aged 13 or older. No purchase is necessary.

“A week later, on Saturday, May 4th, the lucky ticket-holders will gather for the screening at 9:00am at Showcase Cinemas Worcester North, 135 Brooks St.”

“Spider-Man was created in 1962, and has always been one of the most recognizable pop-culture icons,” Howley explains. “Right from the start, he was unique among comic heroes, kind of a nerd or book-worm, who suddenly is given amazing powers. Now, on top of high school problems, girlfriend problems, job problems, etc, he has to take on these fantastic criminals! In his first story he learns that ‘with great power comes great responsibility.’ That theme resonates as strongly today as forty years ago.”

“Radio Stations WTAG and WSRS will be promoting the event beginning April 22. They will conduct on-air contests for some of the tickets and they’ll feature interviews with Howley and comic book creators.”

“In 1989 Howley offered free tickets to a special screening of the Batman movie and was very happy with the response. “I think Spider-Man will be even more fun than the Batman movie.”

“The day of the screening, May 4th, is also National Free Comic Book Day. That’s Entertainment will participate by offering special edition comic books free to customers, no purchase necessary, from 10:00am-8:00pm. One of these comics is The Ultimate Spider-Man #1.”

Next chapter: I can’t resist driving the 110 miles to be a part of the ticket giveaway!

Posted by paul howley at 7:06 AM No comments: