A brief introduction:
My name is Paul Howley, owner of the Eisner Award winning pop culture collector’s store known as “That’s Entertainment” in Worcester, Massachusetts and a second store in Fitchburg, Massachusetts. Some people have called me the “luckiest man in the comic book business.” (I’m not) My stores have been around for over thirty years and it’s been a long and interesting combination of events and people that have brought these stores to this current place. It is not my intent to boast or brag about my store or my life. I just want to tell you my story. In many instances, my wife remembers things a little differently, but this is the truth as I remember it.
The Current Cast of Characters:
Paul Howley: age 48
Mal Howley: age 49
Adam Howley: my son, age 21
Cassy Howley: my daughter, age 18

MY LIFE WITH COMIC BOOKS: THE HISTORY OF A COMIC SHOP:  Part #208

The summer of 2002 went by far too fast as we were getting ready for our daughter to head off to college in West Palm Beach, Florida and we were preparing for our big move from New Hampshire to Jupiter, Florida. Our purchase of the home went quite smoothly as it was professionally handled by our real estate agent, Grace Noble.
I arranged to have all of the utilities turned on as soon as the house in Florida was purchased by us because air conditioning needed to be kept on at all times, especially during the hot and humid Florida summer, so that no mold would develop inside the house. Along with hiring a local company to take care of the pool, we continued to contract with the previous owner’s landscaper to maintain the lawn and yard until we got down there later in the summer.
Ken, the manager of my comic book and collectible stores, had everything under control so I had no fears about moving so far away. He could handle any problems that might arise and if he needed my input on anything, we’d try to resolve things by phone. Still, it was a big decision to move over 1400 miles away!
All of our furniture and boxes of stuff were packed into a rented storage area waiting to be moved to Florida. I wanted to hire a professional company to move all of this stuff to our Florida home since it was such a long distance away from New Hampshire. I had seen advertisements for a moving company called “Ray’s Moving and Storage” and since they claimed that they specialized in moves from New Hampshire to Florida, I thought I’d get an estimate from them for the move. The company sent a representative to my storage area to work up the price for the move. While they measured the furniture and boxes, I mentioned that about a hundred of the boxes contained books and record albums. Lots of heavy items. A few days later they gave me the price quote and although it seemed like a lot of money, I agreed to hire them to move my stuff.
We had a very special group of close friends in New Hampshire and moving away from them was going to be difficult and life-changing. These were people we truly loved and who loved us in return! Nearly every week, we spent three or four days a week with them. We played cards, we ate lots of food, we vacationed with them, we ate lots of food, we raised our kids together, and did I mention that we ate a lot of food? We planned to come back up to stay at our cottage in Alton Bay, New Hampshire each summer so we’d have at least two or three months each year with our group of friends. Even so, although we were excited to begin our new life in south Florida, we knew we’d miss them all. It was an emotional “goodbye.”
Mal and I owned two cars; a Toyota Camry and a small Eclipse Spyder. Our daughter, Cassandra, owned a large Toyota Highlander. We needed to get all three cars down to our new home in Florida but we didn’t feel comfortable with the idea of either Mal or Cassandra driving a car alone. My sister Sharon, always up for something different, along with her youngest son Jake, offered to drive one of the cars to Florida. We decided to leave our Eclipse Spyder parked at our cottage in Alton Bay, NH and we’d try to figure out how to get it down to Florida sometime in the future. We packed the other two cars up with valuable collectibles and items that had important sentimental value and got ready to make the trip to Jupiter, Florida.
Before we left, we got a phone call from the owner of Ray’s Moving Company. He explained that once his truck was fully loaded with our stuff, he found that weight was significantly higher than he had estimated and we’d now be charged an additional $1900.00. I questioned his professionalism and honesty because in my opinion, he should have done a better job in calculating the actual weight of all my boxes. He had full access to everything I owned in the storage area and it shouldn’t be my fault that he underestimated the weight. I told him I thought he deliberately underestimated the weight in order to give me a lower price for the move so I wouldn’t consider any of the other moving companies. He refused to honor the price quote he gave me and insinuated that if I wanted my stuff, I’d need to pay him the full amount he now demanded. I felt I had no choice but to pay him. He controlled the situation because he had possession of nearly everything I owned.
With all of the details seemingly taken care of, we began the twenty-six hour drive to Florida.
Epilog: A year later, while I was working as a volunteer at our Alton Bay neighborhood snack bar, the owner of Ray’s Moving Company came to buy a cheeseburger. After I cooked it for him I told him that I had originally estimated the price of the cheeseburger at $2.50 but for him, the price is $8.00. He didn’t understand my point but I got a chuckle out of it.

Next Chapter: The Florida Adventure Begins. 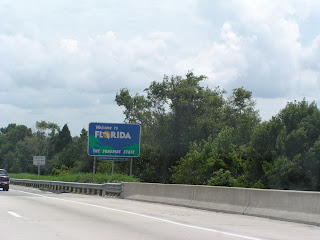