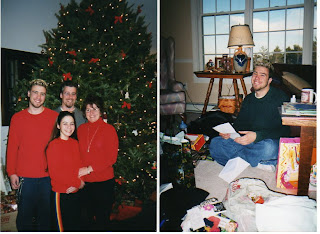 MY LIFE WITH COMIC BOOKS: THE HISTORY OF A COMIC SHOP-Part 165

In October of 2000, while working on compiling all of his poetry that he’d written, Adam’s old computer “crashed.” He lost everything he had done but, since he had all of his poetry written in several small notebooks, he could start over if he had a new computer. So, for his birthday, we bought him a new state-of-the-art, very expensive computer. We didn’t ordinarily spend large amounts on birthday gifts for our kids but we knew this computer would be something Adam would use for many years. After it arrived, Adam worked on retyping all of his poetry when he had extra time. He asked me several times if I wanted to see it, but I put him off, agreeing to read it once he had it all done. In truth, I do not like most poetry so I wasn’t that interested.

As Christmas of 2000 approached, since we had just recently got him the computer, we had no idea what to buy Adam as a gift. We briefly considered buying Adam a new inexpensive car so that he’d have something very reliable for his frequent trips to visit his friends in Rhode Island. After checking out the Kia line of cars we thought the small Kia SUV might be a good idea. But after thinking about it for a while, we realized that Adam wouldn’t really take good care of a new car. Adam had bought my Honda Accord from me and within six months the car was no longer in excellent condition. He just wasn’t good at taking care of things. We’d have to come up with a better idea for a Christmas gift.

Both of our kids usually gave us a Christmas “Wish List” with some serious items, some goofy items, and a few jokes. Adam usually requested “Monkey-bacon.” One of the “joke” requests that Adam put on his list was “pay off my student loans.” Sorry kid, I don’t think so.

Mal loved Christmas. She enjoyed shopping for gifts for people, she loved Christmas music, but most of all, she loved decorating our home for Christmas. This particular Christmas season was busier than normal because we had scheduled a Laconia Christian School staff Christmas party at our home and Mal had a Christmas party for her women’s Bible study group there too. Mal set up and decorated four different Christmas trees that year but the fifth tree, in the family room, would be the one that we’d decorate with the kids. Mal had already put the lights on the tree and put the star on the top but, with the hectic schedules of our kids, there just wasn’t time to all be together to put on the rest of the decorations until a few days before Christmas.

Shortly before Christmas, Adam told us that he had decided that he wanted to go back to college. He knew he didn’t want to go back to The Boston Conservatory so he was looking into transferring to the University of Rhode Island to pursue a degree in Theatre. We wanted him to go back to college so we encouraged him to get as much information as he could before he made a decision about where he should go.

One day, after I came home to find Adam’s dirty dishes in the kitchen sink, I asked Adam to sit down and talk with me. I started by telling him that I loved him and that I was probably the only parent around who didn’t want his son to leave for college. I didn’t think he was mature enough or responsible enough to spend more time around his young friends in Newport, Rhode Island. I believed that they were a very bad influence on him and I questioned his motive for choosing a college in Rhode Island. Adam told me that the University of Rhode Island had a very good Theatre Department. He also explained that he felt it was important to be near his friends. He insisted that he knew what he was doing.

He had a lot of details to work out if he was going to be able to enroll for the January semester. He’d need to work out another student loan, get his transcripts from The Boston Conservatory, enroll in the required courses, and most importantly, he needed to secure housing. This would be the most difficult because transfer students get “last priority” for on-campus housing. Mal and I certainly didn’t want Adam to end up staying with his friends, “the Park Rats,” anymore. If he was to go back to finish his college education, we didn’t think it would be a good idea for him to be too distracted by his friends.

As Christmas approached, Adam began to work on the details for the college transfer and gave his notice at “Friendly’s,” the restaurant where he had been working. He planned to work there as close to the beginning of the January semester as possible because he really needed the extra money. Mal and I saw that Adam was concerned about having enough money to pay for his current student loans while he attended the University of Rhode Island. So, for his “big” Christmas gift, we decided to pay off his largest student loan. He was certainly shocked and happy when he opened that gift on Christmas morning! Later, when he found out that we had briefly considered buying him a new car (but decided not to because we knew he wouldn’t take good care of it) he said, “Yeah, but I bet you’ll buy Cassy a new car.” No Adam, I had no intention of buying your sixteen-year-old sister a new car.

Shortly after the start of the New Year, Adam still had no commitment of a room at the University of Rhode Island. On Thursday, he decided he’d call to insist that the college make room for him in a dormitory. He called them in the early afternoon and he was told by the voice mail message, “Your call is very important to us. Please stay on the line and your call will be answered in the order it was received.” Adam sat on the couch with the phone held to his ear, waiting for his call to be answered by a human being. After several hours of being on hold, a new message came on saying, “The office is now closed. Please call back during regular business hours.” Adam wasn’t pleased. Since there was just about one week left before the January semester was to begin, Adam decided that he would drive to Rhode Island and take care of things personally. He told us that he would go to the college on Monday morning and stand in the office until they promised him a room.

Believing that most college administration-types would give more consideration to a nice, clean-cut looking guy, at our urging, Adam reluctantly agreed to return his hair to his normal brown color from the bright red color it was at the time.

On Friday, Adam packed up some clothes for his weekend trip to Newport, Rhode Island, but he first had to work a full day at Friendly’s. He planned to leave for Newport right after he got out of work that day. Mal and I came up with a short list of things that Adam needed to do while he was in Rhode Island over that weekend. He needed to find a local doctor to give him the school required physical, get information about available student loans, he needed to dye his hair, and he needed to get a promise of on-campus housing. I wrote these things on a piece of paper and brought it to him at his workplace. He promised to take care of these things as he folded the paper and put it in his pocket. He needed to be back in Laconia, New Hampshire by noon on Tuesday because he had an appointment to get his annual, State of New Hampshire required, car inspection and he assured me he’d be on-time.

Next chapter: Adam calls me on Tuesday morning.

Pictures: Our family in December 2000
Adam gets his school loan gift
Posted by paul howley at 7:17 AM