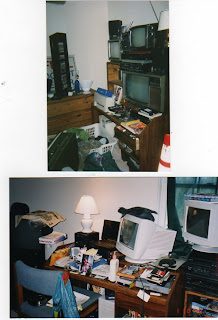 A brief introduction:
My name is Paul Howley. Some people have called me the “luckiest man in the comic book business.” But that all changed as of January 9th 2001.

MY LIFE WITH COMIC BOOKS: THE HISTORY OF A COMIC SHOP-Part 168

The annoying hospital chaplain was trying to usher us out of the hospital. How could we just leave Adam’s body in this hospital? We knew we had to, but it seemed so strange. Eventually we left. I don’t remember much from the rest of this day but here’s what I do remember. Once I got to my home, I called several of Adam’s friends to let them know about Adam’s death. At some point I spoke to the New Hampshire police and they told me what the truck driver who collided with Adam’s car had told them. He said, “The guy was slouched over in his car, as if he had fallen asleep, and he just drifted over into my lane. I blasted my horn but he didn’t respond and as I swerved to avoid him, he crashed into the side of my truck.”

Adam was killed instantly. I was relieved to learn that my son didn’t suffer.

The police asked me if the Honda Accord that Adam was driving had any mechanical problems that could have caused the accident but I explained that the car was in excellent condition. After the police fully investigated the accident they had the wreck towed to a local junkyard.

At some point, Mal’s sister Ginny and her husband Denis were told about the accident and without hesitation, they made arrangements with their employers, packed up their car, and began to drive the 1400 miles to be with Mal and I. Mal’s sisters Carol and Madeline made travel arrangements right away to fly from Georgia and Colorado to New Hampshire. My sister Sharon and her husband Greg arranged to pick up the relatives who were flying in to the Manchester, New Hampshire airport, even the ones who were arriving very late that first night.

People from our church brought food for us that afternoon. Lots of food, but we didn’t feel much like eating. When we were eventually left alone at our home we were in a daze. Mal and I went into Adam’s bedroom and for some reason we felt the urge to clean it. We packed two large trash bags full of trash and tried to straighten up his room by putting his clothes and shoes into the drawers and closet. We found the empty two-pound bag of pistachio nuts that we had given him for Christmas and a huge bowl of pistachio nut shells on the floor. We found several small notebooks full of Adam’s hand-written poetry. I suddenly realized that I had never read any of his poetry before. Now I’d never have the opportunity to share this with him. I shut off his computer and closed his bedroom door.

Our daughter, Cassy, had gone to a Bible study at a friend’s home and when she came home she went right to sleep. Mal’s sisters Madeline and Carol arrived very late that night. I couldn’t remember anything else that happened that night but recently Carol recalled:

“ I spoke with Madeline the other day and she confirmed that we arrived the night of Adam's death. I remember that her flight was coming in around the same time as mine and that Greg picked us up. I remember that when we arrived at your home...there were flowers and baskets everywhere for Adam (Your brother Jay had made some kind of wooden basket filled with gifts of handmade soaps and breads). There were also pictures all over the table of Adam. You both were horribly distraught and I remember thinking that I could hardly see Mal's eyes because she had cried so much. Mal took Madeline and I through the story of what had happened...and told us about the "Newport" kids.”

The next day, Mal’s sister Ginny and her husband Denis arrived and we told them the story of what had happened. My Mom and Dad came from Florida to be with us but since our house was getting crowded, my sister Sharon convinced them to stay at her house for the next week. Our pastor, Jim Morel, came over to discuss our thoughts about a possible funeral or memorial service. He guided us through the basics, using his experiences with past services and he was very helpful. Jim suggested that we consider hiring Wilkinson-Beane Funeral Home to handle the arrangements so I called and set up a time to meet with them. I don’t like funerals and I’ve always heard about the predatory practices of funeral homes. They take advantage of highly emotional, grief-stricken people to sell them services, caskets and burials that are primarily a waste of money. When my grandmother died a funeral home tried to pressure my mother into buying a deluxe casket with a “quality inner-spring mattress guaranteed for twenty years.” But this guy was different. He wasn’t emotional, but he was understanding and sympathetic. He listened to our thoughts and made very few suggestions. We weren’t ready to buy a casket but we came up with some rough ideas of the cost for a normal service. We’d try to come up with definitive plans over the next few days. He helped us write the obituary and he made sure it was published in the local New Hampshire newspaper and our old hometown of Bolton’s newspaper. It was an odd task to describe Adam’s life in such a short obituary. This is what we wrote:

“Adam Dean Howley, 21, died at the Lakes Region General Hospital in Laconia on January 9, 2001, following a motor vehicle accident.
Mr. Howley was born October 10, 1979 in Framingham, Massachusetts, the son of Paul B. and Marilyn L. (Daher) Howley. He was a graduate of Lexington Christian Academy in Lexington, Massachusetts, and attended The Boston Conservatory of Music in Boston, Massachusetts. He had been accepted for the spring semester at the University of Rhode Island in Kingston, Rhode Island, as a theatre major. He starred in his first play at the age of five. He loved to sing and dance and he loved the theatre. He was very active in summer theatre and directed the play, “You’re A Good Man, Charlie Brown” in the summer theatre in Groton, Mass. He also enjoyed spending time in Newport, Rhode Island. Mr. Howley had lived in Bolton, Mass. For 17 years and also lived in Boston, Mass. before moving to Gilford, New Hampshire a year ago. He had worked at Friendly’s Restaurant in Laconia since July. Mr. Howley was a member of the Trinity Church in Bolton, Mass. and the Laconia Christian Fellowship Church in Laconia. Survivors include his parents, Paul and Mal Howley, his sister Cassandra Howley of Gilford, his paternal grandparents John and Marion Howley of Bolton, Mass, and his maternal grandparents Richard and Helen Daher of Florida, 24 aunts and uncles, many cousins and great cousins, as well as his very close friends Alletta, Meridith, Phil, and Victor.”

Shortly after we got home from the funeral home, Meridith and her mother came up to visit. Meridith shared lots of very personal thoughts about Adam with us that touched us deeply. After a while, we all went into Adam’s room together. We wanted Meridith to take the large stuffed dog that she had shared with Adam and she appreciated it. We told her to take anything else that would be helpful for her but I don’t remember if she took anything.

After Meridith and her Mom left we got our mail. In it was a letter from the University of Rhode Island confirming that Adam had a room on campus for the upcoming semester. If the college had mailed the letter a few days earlier, Adam wouldn’t have had to drive down there to get the college to commit to assign him a room.

Next chapter: The memorial service.

Pictures: Adam's messy room
Posted by paul howley at 7:46 AM