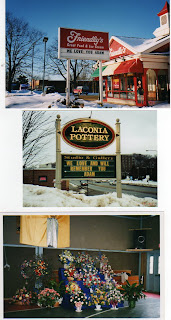 A brief introduction:
My name is Paul Howley. Some people have called me the “luckiest man in the comic book business.” But that all changed as of January 9th 2001.

The current cast of characters:
Paul Howley: age 46
Mal Howley: age 46
Adam Howley: my son, age 21 (referred to as “Skaerie Adam” because in college there were four students named Adam and while they were deciding how to differentiate between the Adams, he slipped out of sight and when he returned someone remarked “Oh, that was scary.” Adam changed it to this phonetic spelling and the name stuck.)
Cassy Howley: my daughter, age 16

MY LIFE WITH COMIC BOOKS: THE HISTORY OF A COMIC SHOP-Part 171

We got a phone call from one of the parents of the kids from Newport, Rhode Island, asking if it would be okay for a bunch of the “Park Rats” to come up to the memorial service on Saturday. They planned to rent a bus so they could all ride up together. Of course, we told them that they’d be welcome.

Mal came up with an unusual idea to help the “Park Rats” say good-bye to Adam. Because of Adam’s love of words and poetry she thought of an interesting way for friends and family to express their final thoughts. We went to the Wilkerson-Beane Funeral Home and we bought a silver casket that had a surface that would allow people to use markers to write “messages” to Adam. Mal, being far more compassionate than I, knew this would help the kids deal with the loss of Adam. I, on the other hand, was partially blaming these “Park Rats” for Adam’s death. My resentment of these kids and my personal grief was making it nearly impossible for me to think clearly enough to write the eulogy that I wanted for the memorial service.

We still had some relatives staying with us at our home so there were a lot of conversations going on most of the day. I remember very little of the content of the conversations but I know that we welcomed the diversion. We were still trying to finish putting together the music portion of the memorial service when Mal’s sister Madeline suggested a beautiful closing song that was a favorite song of Mal’s. Mal worked with several other relatives, sorting through our family photo albums to create a display for the memorial service. Things were pretty hectic. It was during the quieter times that the magnitude of our loss was the most intense. As evening approached, without thinking, I got out a blank videotape to record one of Adam’s favorite TV shows for him (“Ed” starring Tom Cavanagh and Julie Bowen).

Friends continued to stop by bringing more food and offering their condolences. One woman, who had recently lost a child, shared a Bible verse with us. “Brothers, we do not want you to be ignorant about those who fall asleep, or to grieve like the rest of men, who have no hope. We believe that Jesus died and rose again and so we believe that God will bring with Jesus those who have fallen asleep in Him.”

We began receiving condolences through email and lots of cards. Two emails were from women Adam had known. One said, “I really have no words to express how much Adam will be missed. He was an excellent friend and probably the most charming person I’ve ever had the privilege of knowing. I know how much he hated sadness and everyone here in Newport is trying desperately to make him proud. This morning I saw the most beautiful sunrise I have ever seen and we all know in our hearts that it was Adam’s way of saying he’s okay. I can see him now, having the time of his life up there. All of the people he loved keeping him company until we can see him again. If anything, this has renewed my faith in God. Adam was most definitely the epitome of all that is good and he loved to make people smile. He will be remembered forever by all of the people who were fortunate enough to have known him.”

Another wrote, “When I think of Adam I see his smiling face. I see him dancing around enjoying whatever music is playing at the time. Whenever I needed something done and I asked Adam to do it for me, he was always willing to help. My thoughts and memories of Adam are all good ones and happy ones. His smile is the first thing that comes to mind whenever I hear his name mentioned. He was a really good friend and I will miss him. We will all miss him. I’m glad I had the chance to know him and work with him.”

A manager at the restaurant wrote, “I personally wanted to tell you that I am deeply sorry. Adam is and will be always loved by everyone he has touched. He made the lonely feel like they belonged and he made the sad happy again. His wonderful personality, humor and regard for people’s feelings will be remembered forever. He made our days at “Friendly’s” easy to get through.”

Later, as I drove through Laconia, New Hampshire, I discovered that the large sign at “Friendly’s” that normally advertised food “specials” had been changed to read, “We love you Adam.” Our friends, Mike and Liz Verhoeks (owners of Laconia Pottery), used their store sign to say, “We love and will remember you Adam” and “Our love goes out to you, Paul, Mal, and Cassy.”

We got a phone call from Alletta (Adam’s friend from Newport) inviting us to attend a candlelight service that the Park Rats had organized. The kids wanted to do something special in memory of Adam and they didn’t want any trouble with the local police so they actually got permission from the city. The city insisted that the kids have at least a couple of responsible adults there during the service so they arranged to have the local high school principal there to keep things under control. Mal and I really wanted to be there but it would have meant that we’d have at least seven hours of round-trip driving and we knew we’d need to be as rested as possible for the memorial service the next morning. My brother David and his wife Stacy lived a short distance from the Newport park where the candlelight service was going to be held and he offered to go to represent our family. He also offered to videotape it for us.

David called me as soon as he got home after the candlelight service ended to share with us what had happened. He emotionally explained to me how much Adam was loved by these kids in Newport and how much of an impact he had on them. When our conversation was over, I felt differently about these kids. I was no longer angry at them and I no longer resented them. They were mourning the loss of Adam too. I went to my computer and began working on the eulogy. There were only twelve hours before the memorial service the next morning.

There was an article in the Newport Daily News the next morning about the kid’s candlelight service. It said:

“About 100 people held a vigil at Queen Anne Square to celebrate the life of Adam ‘Skaerie’ Howley, who spent the last two summers in Newport and died in an accident Tuesday in New Hampshire.

“Adam Howley lived in Newport for only a short time, but he left behind an army of friends. Howley, 21, died Tuesday in an auto accident in Laconia, New Hampshire. On Friday night, 100 or so of his local friends gathered in Queen Anne Square to remember Howley in a festival of warm feelings on a cold night. The crowd was made up mostly of teenagers from Aquidneck Island’s three public high schools.

“Some wore white T-shirts printed with Howley’s picture. Others were decked out in orange, his favorite color. The mourners gave speeches, sang songs, held candles, laughed loudly, hugged one another and shed tears.

“Howley lived in New Hampshire in recent years, but planned to attend the University of Rhode Island for the upcoming semester, He lived in Newport during the past two summers and made an impact on the kids who frequent Queen Anne Square—the skateboarders, punk rockers and hackey-sackers, the kids who often live on the fringe of the high school social whirl.

“During Friday night’s memorial service in the park, crowd member after crowd member shared an anecdote or positive wish. One boy told how the upbeat Howley helped him through a tough stretch after his mother died. A girl said she knew Howley only slightly, but that he befriended her when she ran away from home.

“Some talked about how he taught them to appreciate and respect each other’s differences. ‘He was the kind of guy who was there if you needed anything,’ said Chris Kennedy, a Rogers High School sophomore. ‘He was just a great man. Everyone really respected him.’

“Evan Sims of Newport started to sing, ‘It’s So Hard To Say Goodbye To Yesterday’ by Boyz 2 Men, but got choked up during the first try. He gave it another shot and faltered again. At that point, several other youngsters joined him on the lawn, wrapped their arms around one another and helped Sims finish the song.

“Victor Thomas of Newport and Tim Dyer of Middletown wore ‘Skaerie T-shirts’ and talked about their friend. Thomas said Howley lived with him for awhile. ‘He was a great guy, a talented guy,’ Thomas said. ‘He changed the lives of all the people here.’

“Dyer said Howley was an upbeat person, who befriended people and encouraged them. ‘He taught a lot of kids what life is all about,’ Dyer said.

“Rogers High School Principal Victoria Johnson attended the vigil. Howley never attended Rogers but he was friend to many students.

“‘We honor the people we love,’ Johnson said. ‘That’s what life is all about.’
“Barbara Pothier is godmother to Howley’s girlfriend, Alletta Cooper. Pothier said Howley was a talented poet, and told the group she wondered if he would have become a politician or an actor. ‘A great person,’ shouted a boy in the crowd, to great applause.

“As the tribute wore down, many sang, ‘I’ll Be Missing You,’ the tribute that Puff Daddy and Faith Evans recorded in honor of rapper Biggie Smalls. The mourners raised candles to the night sky and one boy yelled, ‘Hail to the king! Long live Skaerie!’”

Next chapter: The Memorial Service.
Pictures: Local tributes to Adam.
Posted by paul howley at 5:30 AM