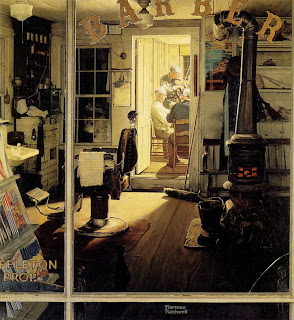 Cast of Characters:
Paul: age 38
Mal: my wife
Adam: my son
Cassy: my daughter
Brian: an artist and my friend

MY LIFE WITH COMIC BOOKS: THE HISTORY OF A COMIC SHOP - Part 86

I love collecting things. In fact, at one time or another, I’ve collected comic books, toys, trading cards, movies, TV shows, and artwork (primarily comic book art). The only non-comic book related art I wanted was an original Norman Rockwell painting. I had always admired his work but I couldn’t afford to buy one of his original oil paintings because they were usually sold for over $10,000 and I always had more “important” things to spend my money on, like food and school tuition for my children.

The comic book business was really great in the early 1990’s and by early 1993 I decided that I could finally afford to buy one. I began to mention my desire to a few of my customers and friends in the comic book business. One of my customers had a father who was an art dealer and he offered me two different Rockwell paintings but neither of them excited me. One pictured an astronaut and the other was something else I had no interest in buying. My good friend, Tom Stanford, gave me a catalog from an auction house in Michigan that was going to be selling a nice Rockwell oil painting. The catalog showcased the painting on the front cover and it was a painting I was familiar with. It was titled, “Shuffleton’s Barber Shop” and it pictured an old-fashioned barbershop that was closed, but in the background you could see that there was a light on in the back room and there were some men playing instruments there. The auction house had estimated the value at $8000-$11,000 and I was ready and willing to pay that much. When I showed the catalog to my wife she encouraged me to bid on the painting.

A little later, as I was leafing through the rest of the catalog I came across a double-page spread that showed the entire painting. (The picture on the front of the catalog was apparently cropped so it would fit the cover.) I discovered that this painting actually had a small rack filled with comic books in the foreground! This was the only Norman Rockwell painting I knew of that featured comic books in it and I was now convinced that I should own this great painting. I mailed in the bidding form with an opening bid of $11,000.

The auction was scheduled to end a few weeks later, but it turned out that my son, Adam, had a performance of his school play of “Yankee Doodle, A Musical Revue” on that same night. Adam was in the seventh grade and this was going to be his first lead role as an actor and there was no way I was going to miss this performance. I arranged to have access to the school administrator’s telephone (this was in the days before cell phones) and I sat in Joodi Ward’s office waiting for the scheduled time for the painting to be sold. My wife, Mal, came in and told me that the play was about to start. I got through to the auction house’s phone “bidder” and I could hear the auction happening. The Rockwell painting was displayed and described to the live audience of bidders. The bidding opened at my mailed in bid of $11,000 and it appeared as if I was going to be the high bidder at that price. I was thrilled! I heard the auctioneer say, “Going once. Going twice. No advance over $11,000?” Suddenly some bidder offered $13,000. I countered with $15,000. Mal came in again and said, “Come on, the play is about to start!” The auctioneer said, “I now have $18,000.” I bid more and for almost thirty seconds it seemed like I was going to end up the high bidder. But someone increased the bid again. By the next time that my wife came in she heard me bidding $32,000! She just gave me one of those “looks.” I knew I couldn’t really justify spending any more than that on this painting so I stopped bidding. It sold for $51,000. A Rockwell original oil painting now sells for over $200,000. I guess I’ll never own one.

I rushed into the theater just in time to see the play begin. Although I would liked to have been the high bidder on the painting, I would hate the constant worry that would come with the ownership and care of such a valuable item. By the way, the play was great.

Next chapter: Our “Classic Toy Trading Cards” are finally released.
Posted by paul howley at 8:44 AM