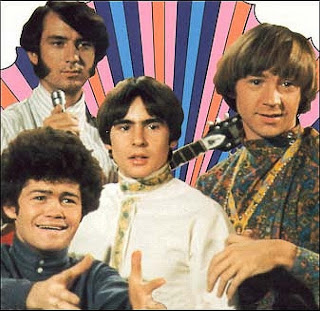 MY LIFE WITH COMIC BOOKS: THE HISTORY OF A COMIC SHOP - Part 88

One day in 1993 I received an advertising flyer from a talent agency that represented a large number of celebrities and entertainers. My store manager, Chris, and I looked through the roster of people they were offering but most of them had no connection to our business of selling comic books, toys, and sports memorabilia. There were lots of singers and some old television stars but one name “jumped out” at me. Davy Jones of The Monkees was available through this talent agency!

The Monkees was one of my favorite bands from my childhood and I thought it would be such fun to have Davy Jones as a guest at my Worcester store. The Monkees had gotten back together for a highly successful tour from 1986-1987 and I had paid to see them five or six times during that period. Each show was extremely entertaining and the audiences seemed to love these guys. Chris and I weren’t sure that our customer base, primarily collectors of comic books and sports memorabilia, would have any interest in seeing an ex-Monkee, but if the price was reasonable enough I would book Davy Jones just for my pleasure. The Monkees were not touring as a group at this time so I thought that perhaps this could be affordable.

The talent agency asked me a bunch of questions about what I would want Davy Jones to do at my store. I explained that I wanted him to sign free autographs for my customers. I wanted Davy to be available to “meet and greet” my customers from 10:00 am to noon, and then he’d take two hours for lunch and come back to sign more autographs from 2:00 pm to 4:00 pm. The agent thought that it sounded possible and she quoted me a price for Davy’s services. The fee was reasonable enough so I accepted the deal with the conditions that Davy Jones would be responsible for his own transportation and hotel expenses. The agent cleared the appearance with Davy Jones and she sent me a contract that I signed and returned. I now had four months to make this a successful event.

Chris and I worked on press releases to send to the newspapers and radio stations in the area and we created a flyer to be sent to the people on my huge mailing list but I wanted to let the general population know about my exciting guest. I decided to advertise his appearance with some “spots” on cable television.

A few months earlier, I had been approached by a cable-television advertising sales person (named Sue) when she was trying to sell me on the idea of actually spending some money on television commercials. I explained to her that I was not in the habit of spending any money on advertising. I had built my business over the previous thirteen years by spending about twenty dollars per year on an advertisement in the annual “Comic Book Price Guide.” I was not going to be easy to convince that I should buy television commercials. But Sue was very persistent and she presented me with a proposal for a fifty-two week advertising campaign. The cable company wanted me to run seven spots each day and pay thirty-five dollars for each of the thirty-second commercials. They also wanted me to pay for the production of the commercials. Cable companies have over a hundred channels running twenty-four hours per day for which they need to sell commercial time. If they don’t sell that space they’ll be forced to run a “PSA” (Public Service Announcement) that they won’t get paid for. So I “countered” with a quite different suggestion. I wanted them to pay for all production costs. I was only to pay thirty-five dollars for one spot each day in a pre-scheduled time-slot and I would ask them to place ten “free” bonus spots anywhere on the television schedule. I was also only willing to commit to a thirteen-week contract. Sue spoke with her boss and they agreed to my suggested terms. We filmed two different television commercials in my store to show the viewers how huge this space was and to let the public know what types of products we sold. Our first thirteen-week contract was expiring soon when we got the contract for Davy Jones’s appearance. Sue convinced the cable company to renew our contract for another thirteen weeks at the same low rate.

The cable company created a new commercial to advertise Davy Jones visit and they really did a nice job. They used a little bit of the original theme song from The Monkees television show and some photos of Davy from the mid-1960’s to let the viewer know that he was coming to our store to sign free autographs. The commercial ran for three or four weeks before Davy’s store appearance and we hoped that the local television audience would be interested in coming to see him. But as we approached the event date, I was surprised (and dismayed) to learn that my loyal customer base seemed uninterested in coming to meet Davy Jones.

Next chapter: Could this event be a disaster?!
Posted by paul howley at 7:23 AM