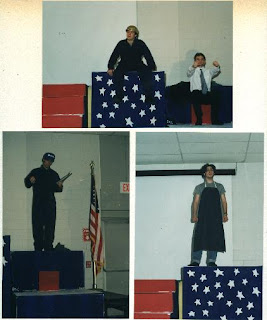 MY LIFE WITH COMIC BOOKS: THE HISTORY OF A COMIC SHOP-Part 124

Although I wasn’t on a regular work schedule since my “retirement” from my comic book and collectible stores, I’d still occasionally go in (usually unannounced) to check up on things. I thought we had a pretty good group of employees, all under the leadership of my long-time, “right-hand guy” Chris. Over the past year we had lost Jose Rivera (a customer favorite) and Richard Ortwein, who returned to social work, but everyone else seemed happy and professional. The stores continued to be profitable and we were all getting paid.

On one rare occasion when I was in the Worcester store, I ran into one of my customers who worked for the big city newspaper. I mentioned to him that I was confused by the newspaper’s indifference to my “press release” about our being awarded the “Will Eisner Spirit of Comic Book Retailing Award.” I explained to him that this international recognition is something that we were very proud of and it seemed to me as if it would make an interesting local story but the editorial staff wasn’t interested in interviewing us about it. He said he’d mention it in the next editorial meeting and within a week he was assigned as a reporter to write a story about us. On February 5, 1998, they published this article:

If you buy comic books in the Worcester area, chances are you know Paul B. Howley. At least you know his store, That’s Entertainment, at 244 Park Avenue.

Howley was recently honored with the “Will Eisner Spirit of Comics Retailing Award.” Named after the creator of the 1940’s masked crime fighter, “The Spirit,” the Eisner Award is the Academy Award of the comic book industry.

It’s a worldwide competition for which every comic book store is eligible. Nominees are judged on their knowledge of retailing and the comics field, community activity and the quality of their store’s image.

Howley was an ordinary 5-year-old whose life changed when a friend of his grandmother gave him a “Batman” comic book. He was hooked. “I loved reading about Batman and I bought everything I could find him in. That was before the TV show,” Howley said.

As Howley’s love for the 12-cent magazines grew daily, his parents used their son’s obsession as an incentive to make him complete chores around the house and as a reward for achieving small milestones in his young life.

“My parents actually have film of me trying to pull out one of my front teeth,” said Howley. “We tied a string to the door and to my tooth. We slammed the door and yanked my tooth out. As a reward for that, I got $2.00 worth of comic books.”

When Howley started dating his future wife, the former Mal Daher, he was forced to choose between courtship and comics due to limited finances. He chose courtship.

After he got married in 1973, his wife, knowing that her husband had been a collector, asked to see his comics. Howley pulled down his well-read books from the attic. When his wife saw the beaten-up comics, she encouraged him to replace them with ones in “really nice shape.” Inspired by his wife’s support, Howley searched for an outlet to do just that. Soon, his passion for comics resurfaced.

Howley moved to Tennessee in 1976 to open and manage a store for a comic book retailer. A year later, a comic book retailer from Ohio offered Howley a job. He was promised an annual salary $10,000 higher than in Tennessee and weekends off. The promise didn’t pan out and, in the first year, he worked forty-two weekends, traveling around the country to comic book conventions, his loyal wife always by his side. “It just made me realize that the way to go was to be on my own. That way, nobody could break their promises,” Howley said. “I never complained because I was learning the whole time that I was doing it.”

Eventually, the grueling schedule, Howley’s desire to settle down and raise a family, and the inability to develop a relationship with his customers, finally took its toll. Howley wanted out.
“You’re selling to some faceless guy and you don’t know who he is. You’re just selling your comics. I wanted a stable business where I knew the customers by name. I know what their interests are. I know what to buy because I know what my customers want. Some of my best friends have started out as customers.”

Howley opened That’s Entertainment on Chandler Street in 1980. He moved to Park Avenue in 1992, and he also owns a store in Wallace Plaza on John Fitch Highway in Fitchburg.

“When I opened my store on Chandler Street, it was because I needed space in my house and the place was as cheap to rent as a warehouse space. It was only going to be a warehouse, and then I thought, “Since I’m here anyway I might as well open to the public.” On the first day, we made enough to pay for the first month’s expenses.”

In 1992, retail sales of comic books totaled more than one billion dollars. Those numbers have dropped by 60 percent in the last five years, Howley said. Almost 10,000 comic book stores have closed in the United States since 1992, leaving perhaps 4,000 stores nationwide.

“This is the single worst time to open a comic book business. Never in history has it been this bad. When we first opened, you could open a store for $5,000, and we know because we did,” Howley said. He said that a store like his would now cost $150,000 to start. “We started at exactly the right time.”

Howley says interest in comics is waning in light of the popularity of computer games, video games and movies. “Most kids don’t want to read. So, just because comics are great fun and exciting is not enough to make them spend $2 on it when they can rent a video game for $2 and have things exploding right in their face,” he said. “We encourage comic books because it really fosters a love for reading. Comics got me through high school.”


This newspaper article also included a full-color photograph of me holding my “Eisner” statue. The publicity got our name out to the local community again and I’m sure we developed new customers because of it. Overall, even though comic book sales had dropped, our business was better than ever.


Meanwhile, my son, Adam, was very busy finishing up his senior year of high school. We were still traveling so that Adam could audition for a slot in different colleges’ Musical Theatre Programs. Adam was also preparing to be in the school’s musical production of “Working.” The drama teacher told me that this project would be a major “showcase” for Adam’s singing, acting, and dancing abilities. He was going to play several major characters in this play. We were all excited to see this production, but two days before the performance, I came down with the flu. I don’t often get sick, but when I do it seems to be serious. I had a very high fever and on the night of his play I couldn’t go. I was lying in my bed and was almost delirious with fever but I remember Adam was so worried about me that he was crying as he stood next to my bed. This was the only one of his performances that I had missed. I heard that it was a wonderful performance.

Thankfully, a few days later, the school did an abridged performance that included many of Adam’s parts and I was able to go to see it. He was really good. Mal and I were eagerly looking forward to seeing Adam’s performances when he got to college!

Next chapter: An old friend returns and we open a new store in Rhode Island.