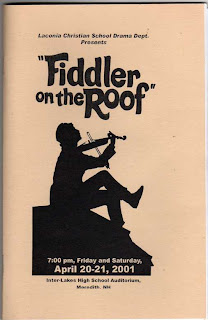 
MY LIFE WITH COMIC BOOKS: THE HISTORY OF A COMIC SHOP-Part 180

After our trip to tour Cassy’s future college was over we needed to get back to dealing with the day-to-day stuff of life. Mal had stopped teaching card-making at Liz Verhoeks’ “Stamping Memories” and she spent more time with her friends who loved her and supported her during this time. I was still involved at Laconia Christian School-- busy with the upcoming drama presentation of “Fiddler on the Roof” and school board related stuff. Thankfully, my two comic book and collectible stores were being run by a very good group of people because I was not functioning at my best. I didn’t need to worry about the stores right now with everything else I was trying to deal with.

Living in our home in Gilford, New Hampshire was strange now that Adam was gone. There were too many memories here, so Mal continued to look for a cottage or house to buy in the area. She found a house in Alton Bay, New Hampshire. This was a run-down cottage located inside the Alton Bay Christian Conference Center. This was a 150-year-old collection of cottages that began as a tented Christian retreat center. Over the years the tents were replaced by primitive structures and eventually they became more permanent seasonal cottages. Very few of these were still in good condition but they were very affordable. One of the drawbacks was that the land was owned by the conference center organization and they leased the land to the home owners. Also, all home owners were required to abide by their strict rules and regulations.

The cottage Mal found had a great location with a nice view of the bay. It was conveniently located near the restaurant, meeting center and chapel. The owner, a 90 year-old man, was asking $69,000 for his cottage. Mal offered him $65,000 and the offer was eventually accepted. At the time, we were told that this was the highest price any of these cottages had sold for! Most of the cottages sold from $15,000 to $30,000.

As it turned out, the process for buying this cottage was more difficult than it should have been. The cottage was no longer actually owned by the old man. It had been turned over to his five children who were now living in several different parts of the United States. We needed all of their signatures on all of the documents to transfer their ownership to us. This took almost two months. We also needed to be interviewed by the Board of Directors of the Conference Center to determine if we would be allowed to live on this property. The cottage sale was contingent upon this approval.

While we waited for the upcoming meeting of the Board to determine if we’d be allowed to move forward with the purchase of the cottage, I continued working to sell the tickets for the school’s performances of “Fiddler on the Roof.” By the time of the show, we had sold out of tickets. We sold more tickets for this show than for any of the other shows the school had performed.

Brenda, the director, dedicated the show to our son, Adam, and allowed us to publicize the newly formed “Adam Dean Howley Memorial Performing Arts Scholarship Fund.” Mal and I used our own money to start this fund and we accepted donations from anyone who wanted to contribute to it. My good friend, Kevin Burns, sent a very generous check and that encouraged me to make this scholarship program an important project for us for the next few years. Many friends and relatives also gave generously.

On April 20th and 21st of 2001, the students of Laconia Christian School put on entertaining and emotional performances of “Fiddler on the Roof.” This play featured Ian Jameson as “Tevye,” Natalie Robinson as “Golde,” Nicole Behan as “Tzeitel,” Sarah Hormell as “Hodel,” Cassy Howley as “Chava,” Kimmy Simpson as “Shprintze,” Sarah Hatfield as “Bielke,” Susie Simpson as “Yente, the Matchmaker,” Paul Johnson as “Motel the Tailor,” and many more. Over 60 students acted in this play along with a couple of dozen students and parents getting involved in the backstage and set building. It was another successful event for the school.

Next chapter: The school year ends.

Pictures: Fiddler On The Roof
Posted by paul howley at 9:54 AM

Labels: Fiddler On The Roof