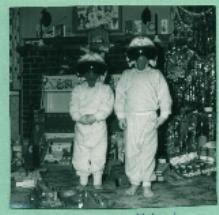 MY LIFE WITH COMIC BOOKS: THE HISTORY OF A COMIC SHOP - Part 24

In 1981, Richard Howell and Carol Kalish contacted me. They were working for a new comic book distributor near Boston, MA named “Solar Spice.” They guaranteed that I would be able to get the big shipment of new comic books on Friday morning each week. This would help me to compete with the other comic book store in town. Carol also offered me generous credit terms. I accepted their offer and stopped ordering the comic books from “Capital City Distribution” of Wisconsin.

I would go to their small office in Cambridge, MA at about 6 AM each Friday morning to pick up my shipment. I would then drive about an hour to get to my store in Worcester, MA by about 8 AM, unload my car, sort the comic books, and fill the customer’s “subscription list.” Each customer had filled out a list of the comic books that they wanted me to reserve for them and I saved the comic books for them on shelves behind the counter. By the time I opened the store at 10 AM, the new comic subscriptions were all done and the remaining comic books were displayed on the racks. Most Fridays, there were customers waiting outside at 10 AM to get into the store to have the first pick of the comics on the racks.

My customers were very loyal and they seemed to enjoy shopping at my store. They would come into the store, pick out the new comic books, look through the large selection of back issues, and many would hang around the store to talk about comic books with other customers and me. The store had a festive, party atmosphere on Fridays. Stanley Hosmer, David Grilla, Stan Moniak, Charlie St.Pierre, Paul Dinsdale, Bob Forte, Andy Fish and many more would form the core comic book customer base and would eventually become friends of mine, not just customers.

Michael Warshaw came into the store looking mostly for old model kits. I had recently bought a collection of old toys from the 1960’s and I sold him an Aurora model kit of “Spider-Man,” unmade in the original 1967 box, for $27.00. We’ve been friends for over twenty years now!

Kevin Simpson was on the way to my competitor’s store when he came by and discovered my store. He came in looking for the current issue of “Starlog Magazine.” While we were talking he told me that he also collected old trading cards. He mostly collected cards that were based on old TV shows like “Lost In Space,” “Batman,” and “The Green Hornet.” It quickly became apparent that Kevin and I had a lot in common. We both collected bubble-gum cards, loved to play Monopoly, and we both watched too much television.

We even videotaped lots of TV shows and we both had the exact same video tape machine. In the early 1980’s, video tape recorders cost about $1400.00 and a blank video tape cost around $20.00 so I was shocked when Kevin asked me to lend him my video tape recorder! He explained that he needed another VCR to hook up to his so he could make a copy of a tape and he didn’t want to pay the high fee to rent another one. Since I had just met him that day I politely declined. After Kevin had been shopping at my store for about a month it became clear that he was becoming a great friend. He was kind and had a good sense of humor. He didn’t seem to mind that I almost always beat him at Monopoly. He was always willing to help out his friends. It didn’t take long before I was happy to lend him my VCR.

Brian Paquette was looking for old toys from the 1960’s TV show of “The Man From Uncle.” “The Man From Uncle” was one of my favorite TV shows when I was a kid. I used to pretend that I was a spy from the “Uncle” organization when I was ten years old. My parents bought me quite a few of the toys that were sold in the mid-60’s based on the show including the Napoleon Solo gun set and the “Foto-Fantastiks” coloring sets so Brian and I shared a common interest.

Mostly because of Mike Warshaw and Brian Paquette, I became interested in collecting old toys. My parents really spoiled me at Christmas time and now I decided to try to collect many of the toys I had as a kid. I put up signs in my store to let the customers know that I now wanted to buy old toys. I began going to local toy shows to try to find some of the cool toys I wanted. My first “find” was a “Steve Canyon Jet Helmet,” mint condition, still in the original box. (I still have a photo of my brother Jay and I wearing our helmets on Christmas morning!) I was now a serious collector of comic books, movie and TV-related bubblegum cards, records, old model kits, and toys! I was fortunate that the income from the store was growing so I could afford to buy a rare collectible every so often.

David Lynch was the employee who ran the store on Sunday, but he wanted to be able to set up at a local flea market to earn some extra money since I wasn’t able to pay him a decent salary. Luckily, my new friend, Michael Warshaw was willing to help out until I could find a permanent replacement.

Through a strange series of events, I’d discover my best friend in the comic book business: my cousin Steven.

Next chapter: I beat Steven again at cards and he becomes my Sunday employee.
Picture: My brother Jay and I wearing our Steve Canyon Space Helmets on Christmas morning in 1959
Posted by paul howley at 7:27 PM