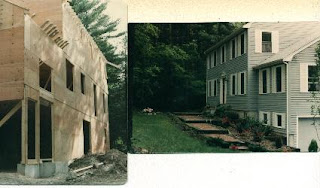 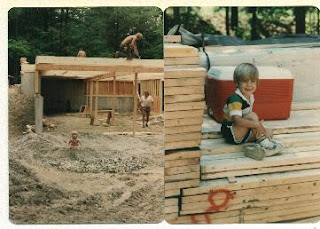 MY LIFE WITH COMIC BOOKS: THE HISTORY OF A COMIC SHOP - Part 25

Business at our comic book store was growing quite rapidly and in late 1981 we decided to buy some land and build a house in the town of Bolton, Massachusetts. I grew up in the town and I knew that the public school system was better than many of the other local towns. My wife, Mal, was still hoping that a private school would open up so that our son, Adam, could be offered a more serious education. We bought a three-acre lot for $37,500.00 and began to build a nice four-bedroom home.

We hired a general contractor who was recommended by a friend. After a few weeks we discovered that many local carpenters refused to work with this contractor because he didn’t have a good reputation for prompt payment. He had also filed bankruptcy; so many suppliers were requiring us to pay for the materials in advance or immediately upon delivery. We began to do more and more of the contractor’s job. We had built a home back in the 1970’s but with my heavy work schedule I knew I couldn’t devote much time to this house. Mal took control of this project. She would bring Adam to the construction site each day to be sure that everything was running as smoothly as possible. She made most of the decisions by herself. My job was to pay for the project!

We listed our house in Sterling with a local realtor and we had an offer of $32,000.00 within the first week. We accepted the offer but ran into trouble when our buyers applied for a mortgage. When their bank ordered a survey of the property, it was discovered that one side of the house was on town property and a corner of the house was on our neighbor’s property. Since we had paid cash for this house, we never thought about getting the property surveyed. We assumed that the house would fit on the land!

Our neighbor offered to sell us a few feet of his land for a few dollars, but he suggested that we work on acquiring the other land from the town first. The town would have to hold a special town meeting to decide whether they would sell us the required amount of land and that could take a few months. Luckily for us, the town agreed to sell us the land for one dollar.

When we went to our neighbor to buy the few feet of land from him we found out why he really wanted us to go to the town first. He had already entered into a deal to sell his property and he knew that the boundary problem could hurt the sale of his house. We now had to deal with the new owners. They agreed to sell us the land, but they now wanted $200.00 plus the cost of the new surveying and the attorney’s fees. We thought this was reasonable so we agreed. We waited about a week for them to write up the agreement but it didn’t come. We called them and they said that they now wanted $500.00 and all of the other fees. We agreed to the new terms. A few days later they demanded $1000.00 plus all of the fees. I argued that the nonsense had to stop. We made our final offer of $750.00 plus all of the legal fees and surveying costs. They accepted our final offer and we finally completed the deal. We used the proceeds from the sale to continue the building of our new house. Our buyers were happy to get into their new home. Two years later the buyers sold the house for $125,000.00!

We knew that we didn’t want to end up with a huge mortgage payment each month so we tried to convince the suppliers and carpenters that we would pay them every Friday for the work they had done that week. I’d get home from work at about 7 PM each Friday and hand the carpenters their paychecks. We were able to pay everyone in the early stages of the building but we were quickly running out of available cash. We had spent most of our savings to buy the land. Sales from our comic book store were really good, but I still needed to keep some cash for the business.

I decided that I needed to sell some of my personal collectables to help finance my new home. I evaluated my collectables and thought that I could get a good price for my extensive trading card collection. I had most of the “non-sports” trading cards that were made from 1957 to 1977, all in excellent to mint condition and had many of the original display boxes and the wax wrappers that the cards came in! I even owned an original painting that was used to produce the rare “Mars Attacks” set. I called a few local dealers and was disappointed at the low offers I was getting from them. I sent a list of what I had to a dealer in Maryland and he offered me 35% of the retail value of the collection. My friend, Jim Stoll, and I drove to Maryland to sell my trading cards. The dealer paid me $4500.00. (About one year later, the trading card business “exploded” and my cards would have sold for at least $15,000.00 to this same dealer!)

This money got us through another week, but we knew we’d have to come up with a better solution. After a short search, a local bank offered to loan us $50,000.00 to finish the project. This loan was a great comfort to us but we still worked hard to not spend it all. By the time we completed the new house we had only used $25,000.00 of the bank’s money. In September of 1982, we moved into our new home.

We decided to have my family’s big Christmas party at our house that year. It was at this party that the lives of two families were changed forever. After we ate and had all exchanged gifts, a bunch of us decided to play cards. We played poker and blackjack for dimes and quarters. While we were playing, my cousin, Steven Higgins, explained to me that he and his wife Donna were saving money to buy a house. They had saved about $5000.00 and were actively searching for a house. When Steven and I were much younger, I would usually beat him when we played cards. Today was no exception. Even though we were only playing for dimes and quarters, Steven now owed me $35.00. I felt bad that I was taking away money that he would need to buy his house. Steven offered to work at my store for two Sundays to pay off his loss. I was thrilled because it was very difficult for me to get employees to work on Sundays.

Steven was perfect for my store. He had loved comic books since that summer of 1970 when he lived with my family for the whole summer. He had a really funny sense of humor and enjoyed “goofing around” with customers. After he worked for the two Sundays to pay his “gambling” debt he asked if I would pay him to continue to work at the store. He would save the extra money to eventually buy his house. It didn’t take long for Steven to learn the comic book business. He had a natural ability as a retailer. He learned how to buy collections of old comic books and toys. He enjoyed himself so much at my store that he wanted to become my permanent Sunday employee.

Next chapter: Cousin Steven leaves the nest!
Pictures: We build our Bolton, Massachusetts home
Posted by paul howley at 5:41 AM