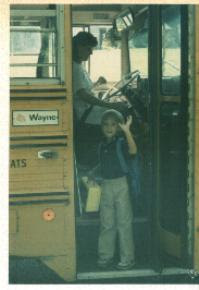 MY LIFE WITH COMIC BOOKS: THE HISTORY OF A COMIC SHOP - Part 39

In September of 1985 I had one of those exciting experiences that only a parent could understand. My son, Adam, was going off to school. Actually, it was only kindergarten, but he would be riding on the school bus (without me!) and we were allowing strangers to take care of him. He would be taught by teachers that we didn’t know and that worried us a little bit. My wife, Mal, and I had always taught Adam. This was also a beginning of our child’s path to independence. As a parent, I was both excited for him and sad because he was growing up so fast. For Mal it was an emotional time.

I was fortunate that I had a good staff of employees at my comic book store. Their competence allowed me to take time off to see Adam get on the school bus in the morning and be there when he got home on that first day of kindergarten. When that big yellow school bus came to pick Adam up, his family was there to see him off. Of course, his sister Cassandra was only sixteen months old but she knew that something exciting was happening today. As usual, I was busy video taping this important milestone in Adam’s life.

Four hours later, the school bus returned my son to the top of our driveway. Adam was busily saying good-bye to many of his newfound friends as he got off the bus. As the videotape rolled, he gave us the details of his first day of school. He was supplied with a nametag so the teacher could learn who he was and the students were placed at desks, seemingly at random. Adam already knew some of the kids from the playgroups that Mal had arranged and he enjoyed meeting new kids. Adam was never shy around kids or adults. He was a little disappointed that they didn’t do much work that first day. He wanted to learn new things and use the skills he had already developed, but on the first day of school they just colored some pictures. We assured him that he’d do more as the year went by. When we asked Adam what his favorite part of school was, he thought for a moment and replied, “The bus ride.”

After a few months of school had gone by, Adam’s disappointment grew. He once explained to us how frustrating it was that most of the other kids in kindergarten didn’t know how to read. In fact, most of the kids didn’t even know their colors! He felt that he wasn’t learning much new. Although Mal was concerned about this, I wasn’t. I had gone through the public school system and I was doing just fine. Mal had been praying that we would find an alternative school for when Adam went to first grade. She began searching for the surrounding area for a private Christian school and found a relatively new school called The Imago School. Two women, Joodi and Linnie, who had a desire to offer a “classical” education for children, established this school.

When we went for our “informational interview.” I wasn’t really going in with an open mind. I wanted “the best” for my boy. I wanted sports. I wanted large classes filled with different kinds of kids so that Adam would be exposed to lots of what life had to offer. I wanted the large assortment of resources that only a government school could offer, because of their tax filled coffers. The Imago School offered none of these important features. They focused on a serious learning experience for the students. There were no sports or extra-curricular activities. Classes were very small. Some had as few as six students. And to make it worse, they charged about $1800.00 per year for this education! I was already paying thousands of dollars per year for the local school system and I thought it would be okay to send Adam to these public schools. I was against this private school idea but I agreed to pray for guidance before I made my decision.

Now, for some of you, the idea of prayer (and the answer to prayer) is a foreign concept. In my life I’ve prayed for many things and I’ve had many prayers answered. I believe that my relationship with God is personal and real. I know some of you will think I’m nuts. I know some people who have actually “heard” the voice of God, but I haven’t. I do however believe that I have “sensed” His will for my life. In this situation it became clear to me in many ways that I needed to give the Imago School a try. It was important for Mal and I to be in agreement on these serious issues regarding our children. As it turned out, this school would become one of the most important parts of my children’s lives.

Next chapter: Back at the comic book store we meet our “Norm”…Darryl Hunt.

Picture: Adam's first day of school.
Posted by paul howley at 6:36 AM