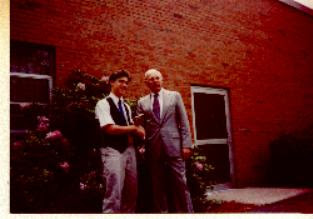 
MY LIFE WITH COMIC BOOKS: THE HISTORY OF A COMIC SHOP - Part 93

The end of 1993 brought lots of change to my circle of friends and family. I bought our first real personal computer for my family and presented it to our kids as a “big” family gift. I think it was a Packard Bell system that operated at a whopping 66 megahertz for an outrageous $3,000. In “the olden days” these computer systems were a nuisance to get ready to use. All of the software had to be loaded using multiple floppy discs. Luckily, we had Adam to tackle this task. Even though he had never used a computer before, he had a knack for putting electronic equipment together. Within thirty minutes it was up and running.

Adam was halfway through the eighth grade at The Imago School and they did not offer a high school program there. We knew that we had no interest in Adam attending the local public high school. I had gone there twenty years earlier and it wasn’t challenging to me at all. It was “common knowledge” that the schools had only gotten worse over the past two decades so we began to consider our options. We had heard good things about Lexington Christian Academy, a college preparatory high school located in a suburb of Boston. The tuition was over $10,000 per year but we discussed this as a family and determined that we would “sacrifice” our big family vacations in order to afford this challenging school for Adam. Adam toured the school and scheduled an appointment to take the entrance exam.

As we were driving to the school on the day of the entrance exam, we realized that the almost one hour commute to and from school each day was going to be horrible. The only practical way to get there was by the major highway Route 128, also known as “Dead Man’s Highway,” because of the poor design and crazy drivers traveling at over 80 miles per hour! I was still working at my comic book store in Worcester on a regular basis so I couldn’t commit to helping Mal with the school commuting. She would have to deal with getting Adam to his new school and Cassy to her school each day. This drive wouldn’t be pleasant but it was worth the aggravation to provide the superior educational opportunities for Adam.

Adam took the test and got the highest score of any of the incoming freshmen so he was offered a spot for the next school year. His test score also allowed him to take another test to determine if he was eligible for the “Headmaster’s Scholarship.” His score on this test was the highest and he was the recipient of this distinguished award. This scholarship would have been for a full, four-year tuition at Lexington Christian School but since my income was deemed to be too high, Adam received an annual stipend of $750.00. Obviously, it’s not quite the same, but every little bit would help. Most importantly, we were very proud of Adam.

Business at my two comic book and collectible stores was still growing. Baseball cards and comic book sales had dropped a bit but we got lucky enough to find a product that would sell enough to make up the difference. It was called “Magic The Gathering” and a small company called “Wizards of the Coast” created them. This was a trading card fantasy strategy game that was also collectible because the manufacturer deliberately printed less of certain cards to make them “rare.” A customer had requested these cards a few months before they were released so I was probably aware of them before most of my local competitors. I ordered ten full boxes and we sold all of them within a few weeks. Demand for these cards became intense and the prices rose quickly on the “short-printed” cards. We were able to get a few more small shipments of these cards but we certainly couldn’t keep up with the demand. Luckily, we had a good relationship with numerous distributors and they took good care of us with “Magic The Gathering” cards. By the time the second series of cards were released, we were pre-ordering over fifty boxes that had a retail value of over $100.00 each. These sold out within one day. When the third series came out we sold over one hundred boxes the first week. My Fitchburg store co-manager, Richard Ortwein (who had recently returned to work there after a short time away), was smart enough to alert the local media about this amazing new product and the local newspaper ran a large story about these cards and our great second store.

This also was the year (1993) that two of my favorite customers, Paul Dinsdale and Christine Carelli, got married. This was a big deal for me since I was involved in “setting them up.”

Next chapter: Do you remember “POGS?”

Picture: Adam receives the "Headmaster Scholarship For Academics" at Lexington Christian Academy
Posted by paul howley at 6:24 AM