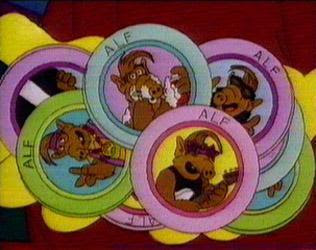 MY LIFE WITH COMIC BOOKS: THE HISTORY OF A COMIC SHOP - Part 94

While the nation-wide sales of comic books and sports cards declined, we were fortunate enough to discover new products to add to our store inventory so that our gross sales figures were stable. “Magic The Gathering” cards were the hottest selling product in the specialty stores like mine and we were able to establish relationships with numerous distributors to maintain a good, continuing supply for our eager customers. We sold all of our supply at low prices while most of our competitors began to charge huge premiums above “suggested list price” on packs of these cards. We knew that this would benefit us in the long run because our customers would realize that we were honorable and we could be trusted to sell our products at the lowest possible prices. We try hard to think long-term.

There was a company in Hawaii that manufactured a juice called “Passion Orange Guava Juice.” This was combination of these three fruits. Underneath the bottle top they included a round cardboard disk with an illustration on it. These disks were nicknamed “POGS” and thousands of Hawaiians began to collect them. Eventually, the company created a simple game that included these POGS as game pieces.

The game could be played with two to six players. One at a time, each player would stack one of his POGS, image face down, in the center of a playing area until about ten to twelve POGS are in the stack. A player then throws a thicker POG, called a “slammer,” on top of the stack attempting to turn over as many POGS as possible in his turn. The player “wins” the POGS that flip face up. The next player restacks the remaining POGS and repeats the process. The winner of the game is the player who was able to turn over the most POGS. The game became very popular in Hawaii and some clever entrepreneur began to distribute these POGS into the rest of the United States. Other companies began to manufacture similar game piece disks that could be used in the game. There were POGS with pictures of birds, flags, animals and flowers. As these POGS became more popular, the companies began to license images of Star Wars, NASCAR, comic book heroes, television cartoon shows, and hundreds more. The game of POGS caught on with mostly young children and it became a national obsession. Part of the reason that these were so popular with kids was that they retailed for a nickel or a dime each and any kid could afford to buy them. Adults also bought POGS to play with and some people even bought them to just “collect.”

My store began buying POGS from various suppliers. We bought most of the POGS in “bulk” boxes of 1000 assorted styles for two cents per POG and put a sign in our store windows advertising that we had these available. Crowds of customers streamed in to dig through our large boxes of POGS. This game had now really caught on with young-teens and it seemed as if every school playground had regular POG games going.

Within a few months, the craze had grown so big that we were now ordering new assortments three times each week. Some companies started manufacturing “deluxe” POGS with metallic finishes, 3D pictures and even holograms. These sold for more than the standard nickel. Some sold as high as twenty-five cents each. It may seem like it would be difficult to make much money on items that sell for a nickel or a quarter, but believe me, we sold thousands of these every few days. It was an exciting time because the kids loved the product. Sales remained strong on POGS for almost six months but Chris, my store manager, always ordered in an intelligent manner. It would certainly have been easier to just order a huge quantity of POGS at one time but he was content to order in smaller quantities a few times each week. This worked nicely because our customers now had a reason to come back to the store multiple times each week to see the new shipments. If we had ordered a ton of the POGS at one time, the customers would have seen everything the first time they came in and they’d have no enthusiasm to come back.

Without much warning, the public school system banned POGS from the schoolyards. Apparently someone thought the game of POGS seemed like gambling since players “won” the opponents POGS. Sales screeched to a halt because school is the main place that children get together and now they’d no longer be able to play POGS at school. Any area that was affected by this change in school policy saw sales of POGS drop by 90% within a few weeks. Many retailers got stuck with huge inventories of unwanted POGS because they ordered hundreds of thousands of them at a time, but not us. By the time the POG craze ended we had less than fifty dollars worth of inventory left. It was time to find “the next big thing.”

Next chapter: My son starts high school and my daughter finds a “best friend.”
Posted by paul howley at 6:05 AM