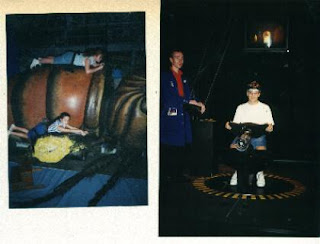 MY LIFE WITH COMIC BOOKS: THE HISTORY OF A COMIC SHOP - Part 95

While my whole family was watching television together we saw a brief commercial advertising a new attraction at Walt Disney World in Florida. The commercial was “hyping” the new, cutting-edge virtual reality interactive attraction at EPCOT. Adam was really intrigued by this and he asked if we could go to see it. Cassy had seen a commercial advertising a new attraction based on the popular movie of “Honey, I Shrunk the Kids” and she wanted to see that. We hadn’t been to Disney World for a while and we knew that we would not be able to afford many of these kinds of expensive vacations once Adam started to go to Lexington Christian Academy because of the high tuition expense. We asked our kids if they wanted to invite two of their friends to come along with us and we all agreed that it would be nice to travel with two of our neighbor’s children, Nathan and Laura Daman. The Daman family had been friends of ours for quite a long time and we had shared the car-pooling duties to and from The Imago School for many years. We knew that the Daman family couldn’t spend the money for air travel to Florida because they had three children in private school, so we planned to drive our mini-van the 1500 miles to Disney World. Nathan and Laura were excited because they had never been to Disney World and my kids were happy to share this vacation with them.

We planned to leave early one morning in August but for some reason, once we had the van all packed up the night before, we changed our mind and decided to leave right then. Since the kids were all excited to go they were easy to convince. Mal and I each drove while the other slept and we ended up driving twenty five hours straight and we arrived in Orlando Florida earlier then we had anticipated. We had rented a large trailer in the same trailer park where Mal’s sister, Ginny, lived, so it was ready for us even though we got there early. The next day we got ready early and as usual, we arrived at Disney World before the park opened so we’d have a full day of “park time.” We headed directly to EPCOT and found the new attraction, “Innoventions” to try out the new virtual reality thing. We were the first group of the day to arrive there.

While we were waiting for the doors to open I began chatting with the Disney employee at the door. He told us that the virtual reality glasses were valued at $125,000 each and he explained how “cool” the virtual reality game experience would be. Then to my astonishment, he explained that only four people from each group of one hundred and fifty “guests” would actually get the opportunity to try this game! I told him that this virtual reality game was really the major reason that we made this long trip to Disney World and that I thought the television commercials were very deceptive because it appeared as if all of the “guests” would get to have this experience. The employee made it clear that there would be no possibility of our whole group getting to try this game. We all discussed this situation and we agreed that if only one of us could do it, it would be Adam. The employee was smart enough to sense our disappointment so he assured us that Adam would be chosen. Even though I didn’t personally get to try it, it was exciting to see Adam have so much fun.

The next day when we went to MGM Studios to see the “Honey, I Shrunk the Kids” attraction we were unable to pre-arrange it so that Cassy would be chosen to be part of the audience participation part. When we got there we were ushered into the attraction with a large group of other “guests.” We had tried to prepare Cassy in advance so she wouldn’t be too disappointed if she wasn’t chosen to “ride the giant bee” in the show and she seemed to understand. When the Disney “cast member” asked for volunteers from the crowd, dozens of kids raised their hands. For some unknown reason, both Cassy and Laura were chosen! Both of my children had a great vacation and Nathan and Laura had fun too.

In the fall of 1994 my son, Adam, was to begin attending Lexington Christian Academy for high school. This prestigious school was located near Boston and my wife was going to have to make the nearly one hour (each way) commute to get Adam there and pick him up at the end of each school day. It would mean almost four hours of driving just for Adam and we would still have to get our daughter, Cassandra, to The Imago School each day when it was our turn to drive in the carpool with the Daman family. Mal was not looking forward to this nightmarish schedule. A week before Adam’s school started classes we were presented with a list of all of the families with children attending the school. Mal contacted the Tedeski family, who lived one town away from us, and suggested a carpooling possibility. They had already committed with another family but they agreed to also drive Adam on their “designated” days. Mr. Tedeski drove to our home to pick Adam up in the morning even though it was out of his way. The other family involved in the carpool was not as cooperative. They insisted that Adam would have to be driven to their house on the mornings that it was “their turn” to drive even though it was expected that we drive out of our way each afternoon to get their child home. We were just happy to reduce the driving requirement.

Adam fit in with the other students at Lexington Christian Academy right away. Most of the students were hard working, motivated and eager to be taught. It was “suggested” that all students should participate in the sports program and almost every student did. Adam’s former school didn’t offer any sports and Adam didn’t have much interest in joining the town leagues so he had very little athletic talents although he had played “T-Ball” and one season of little kids soccer. He reluctantly decided to join the junior-varsity soccer team. He went to every practice and played in almost every game but he only scored one goal in the whole season. He didn’t seem to mind because he enjoyed spending time with the other team members.

Adam was a fun guy and he made friends easily. His true passion was acting. The Imago School had made acting fun for Adam and in the eighth grade he was the lead actor in the musical, “Rags to Riches.” Chris Greicco, a dedicated and creative teacher, taught Adam drama at Lexington Christian Academy. Before Adam went to high school his desire was to be an actor. It didn’t matter what he would act in. Film, television or theatre was fine. But once he was taught and directed by Chris Greicco his interest became mainly theatre.

My daughter, Cassy, was now in the fourth grade at The Imago School and she had many friends at the school. A new girl, Bethany, came into Cassy’s class this year. Cassy had noticed Bethany’s name on the Imago School family list and she had called to arrange for Bethany to come over to our house to play before the school year started since she lived very close by. For some reason they didn’t hit it off on this first time together but by the middle of the year they really became “best friends.” Bethany was a fun, giggly, girl and when Cassy and Bethany got together they laughed most of the time.

Next chapter: I prepare to “retire” from my comic book business.
Pictures: Adam using Disney's virtual reality gear and Cassy riding the Honey I Shrunk The Kids giant bee
Posted by paul howley at 4:21 AM