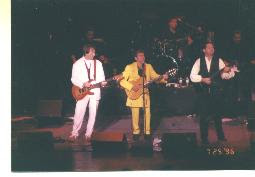 MY LIFE WITH COMIC BOOKS: THE HISTORY OF A COMIC SHOP-Part 110

I learned that “The Monkees” were going to be performing at the “Foxwoods Casino” in Connecticut in late 1996 so I got tickets for myself, Mal, Cassy, my sister Sharon, and her youngest child, Jacob. Sharon had been a big fan of Davy Jones during the initial years that “The Monkees” television show ran on American TV and she had even written a “love letter” to Davy and was disappointed that he didn’t reply. I knew she’d get a kick out of finally seeing them in concert.

As usual, The Monkees put on a really fun concert as they sang updated versions of “hit” song after “hit” song. Towards the middle of their show, Peter Tork, Micky Dolenz, and Davy Jones would each sing a few solo songs to showcase their individual non-Monkee musical interests. Peter played a couple of banjo songs and I can’t remember what Micky played but they were both entertaining. Davy Jones was far more memorable. He knew how to “work” the audience of mostly middle-aged women as they squealed with delight while he danced around the stage. He also sang “Girl,” which was the song he sang as a solo artist on “The Brady Bunch” TV show after The Monkees had been canceled. Davy came down from the stage while he was singing and moved up and down the aisles as many women desperately tried to touch or kiss him. He shook their hands but avoided kissing any of them until he got to my group. He saw my daughter, Cassy, and bent down to give her a kiss, then he continued running through the aisles, (kissing no one else) until he finished singing the song up on the stage.

The woman sitting next to Cassy said, “Oh, you must be so excited that Davy kissed only you!” Cassy replied, “Oh, that’s not so special. I sat on his lap and shared a tuna fish sandwich with him.” Cassy was referring to the time that Davy Jones was a guest at my comic book and collectibles store in 1993. The woman didn’t know what to make of Cassy. I was left wondering if Davy Jones actually remembered Cassy from three years ago! (I’d find out about five years later…but that’s a story for another time.)