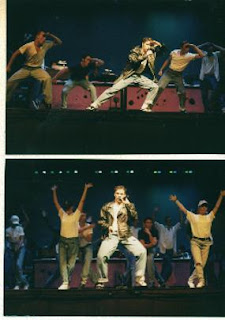 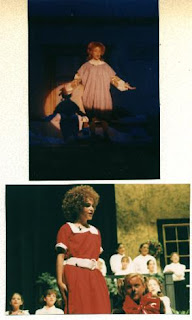 MY LIFE WITH COMIC BOOKS: THE HISTORY OF A COMIC SHOP-Part 118

The summer of 1997 was a busy time for my family. Both of our children decided to participate in local community theatre programs. Adam went to Groton, Massachusetts for a second year of acting lessons while Cassy began a summer program in Hudson, Massachusetts. These summer programs consisted of dance, vocal, and acting lessons that would culminate in a series of performances. Adam would be in “Grease,” while Cassy would be in “Annie.”

After a series of auditions, Adam got the part of “Kenickie,” the second lead in the play. He was disappointed because he really wanted the main male role of “Danny” but he trusted that the director knew what he was doing. Cassy auditioned and got the lead role as “Annie.”

Both of these theater programs were for kids aged 12-19 and they required quite a commitment from both the kids and parents. The kids had to be there each weekday from 9 am to noon for the first month and as the big performance dates neared, the schedule of rehearsals got much more intense. Adam had his own car so he drove himself to his rehearsals in Groton, but most of the other kids needed their parents to drive them in the morning and pick them up after noon each day. For Mal and I, since we drove our kids to and from private schools each day during the school year, this meant that we’d have no break from this obligation of being a “parental taxi service.” We willingly did it though, because both of our kids had a passion and a talent for drama.

Cassy and Adam learned their lines and songs very quickly and made friends in the classes. This was a difficult time for Adam though, because his girlfriend, Meridith, was not able to join this theater group for this particular summer. She was enrolled in a summer theater, pre-college program at Carnegie Mellon University, in Pittsburgh, Pennsylvania, to get the teaching she felt she’d need to eventually be accepted into The Boston Conservatory. Meridith was no longer going to the Lexington Christian Academy with Adam and they wouldn’t see each other for the whole summer. This was a difficult decision for Meridith to make. She could spend the summer having fun performing with Adam, or she could sacrifice a few months of fun in order to get the education she knew she needed to further her dream of a career as a performer. Adam hated being separated from her.

During the long weeks of rehearsals, the girl playing “Rizzo” opposite Adam seemed to develop a “crush” on him. She frequently called our house in an attempt to talk with Adam. Sometimes he’d talk with her but he sensed that she was “after” him. Adam tried to maintain a good friendship with her but he just wasn’t interested in being anything more than friends. He knew he had to maintain a good working relationship with her so he couldn’t be rude and tell her that he loved Meridith.

After months of preparation, it was time for the actual performances. We invited several friends and relatives to both plays and we were glad that many planned to attend. It was a crazy schedule because the plays were both performed on the same nights in different towns. Since this was Cassy’s first lead role in a play, we decided to see all three of her performances and we planned to see two of Adam’s performances.

Cassy was excellent as “Annie” and her performance was very natural. The other kids were basically the same age as Cassy, but because she was very petite, she looked perfect as “Little Orphan Annie.”

Adam did a great job of acting, singing, and dancing as “Kenickie” in “Grease.” In fact, after one performance, Adam was approached by a representative of a film company offering him a job acting in an industrial training film for a national chain store. The man gave Adam a business card and told him to call soon if he was interested in this kind of work. Even though we kept suggesting to Adam that he should follow up on this potentially lucrative offer, he just didn’t seem interested. It seemed as if he wasn’t interested in acting in movies or television anymore. His “passion” was the stage. As parents, we could only encourage him to try it. We couldn’t force him even though we thought it could be a great opportunity.

Mal and I were not involved in the running of these two summer theater programs but we watched how they were run and we would soon find a use for this new-found “education.”

Next chapter: We rethink our comic book store’s website.
Pictures: Adam performs in "Grease"
Cassy performs as Annie in "Annie."
Posted by paul howley at 5:04 AM