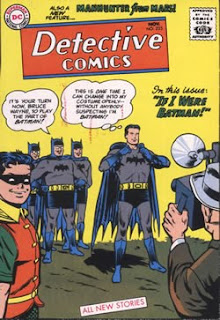 MY LIFE WITH COMIC BOOKS: THE HISTORY OF A COMIC SHOP-Part 117

I have a customer named Pete (not his real name) that I’ve known for many years. Pete used to set up at flea markets and toy conventions selling old collectibles, but he didn’t deal in comic books. One day, he came into my store and offered to sell me a lot of six 1950’s comic books including three sequential Batman comic books and three sequential Detective Comics, all in gorgeous condition. Since Pete had never dealt in vintage comic books before, I asked him where he got these.

He explained that his teenage son had regularly done yard work for a neighbor and that one day, in addition to the money he was paid, the neighbor invited the son into his basement to show him something. As they walked downstairs, the neighbor said he had recalled that the boy enjoyed comic books, so he wanted to give him something special. He opened up a steel closet unit and randomly pulled out the top three comics from two of the stacks. The neighbor had saved these comics since they were first published and he apparently had no idea how valuable they were. The boy expressed his gratitude and brought the comic books home to show his father. Pete knew that these were quite valuable and convinced the teen that he should sell these to my store because the money was needed more than the comic books. Because I had a good feeling that these issues would sell within a year, I was happy to buy them and made Pete a very generous offer.

I also told Pete that this collection of comic books could be worth a small fortune and that he should tell his neighbor that there is a strong market for them before he gave them all away to someone else. Pete agreed and said he’d do his best to convince his neighbor that he should allow me to make an offer on the collection. Over the next few months, when Pete would come into my store, he would explain hat the “time just didn’t seem right” to approach the neighbor about the comic book collection, so there was nothing I could do about it. For some reason, Pete seemed reluctant to move forward. I offered to pay Pete a generous commission for securing this collection for me and he seemed interested but several more months passed before I saw Pete again. I didn’t want to pressure him about the collection but the thought that this amazing group of rare comic books could end up disappearing really bothered me.

Pete told me that he had actually seen the comics and he estimated that there were about 1500 comic books, mostly published by DC Comics, and all from the 1950’s. He wasn’t able to look through any of the stacks to see what particular issues were there but he was able to notice that most of the books on the top of each pile was a superhero title like Batman, Superman, Action Comics, Adventure Comics, etc.

I told Pete that he needed to be honest with the owner of these comics and tell him that I was a serious buyer. Without seeing the books, I estimated that the comics would be valued at a minimum of $10,000. If certain “key” issues were included, the value could easily be $30,000 or more! I suggested that Pete should offer him $10,000 as a minimum price so that the owner would know that he had a very desirable collection. Unfortunately, Pete got greedy. He figured that if I were willing to pay $10,000 for the collection, he’d try to make a low offer to the neighbor and then resell the comics to me at a huge mark-up. Instead of being honest with his neighbor Pete thought he’d be “clever.” Pete offered his neighbor $600 for the whole collection and even though the neighbor had no idea of the true value of the comics, the offer wasn’t enough to interest him in selling them. Now there was no way that Pete could make the man a fair offer without revealing his previous scheme to take advantage of him. I suggested that Pete should give me the neighbor’s phone number so I could try to buy the collection from him and still offered to give Pete a “finders fee” if I got the comic books. Pete (still trying to be “clever”) said he’d continue to try to find a way to buy the comics directly from his neighbor. As it turned out, Pete ended up with nothing.

A local comic dealer needed some carpentry work done on his home and he hired a local carpenter. When the carpenter arrived to start the job he noticed the comic books lying around and he said, “Hey, I have an uncle that has a bunch of old comic books. Would you be interested in them?” Within a week, the carpenter arranged for the other comic book dealer to view the collection and make an offer on it. As the dealer walked down into the basement, he noticed that the first comic book on one of the piles was a gorgeous copy of Detective Comics #225 featuring the important key first appearance of The Martian Manhunter, a character long-considered to be the first new “silver-age” superhero. This book alone was worth almost $4000! The dealer was able to buy the whole collection for a reasonable price and he made quite a nice profit on it over the next year.

I certainly wished that Pete’s greed hadn’t prevented me from buying this collection.

Next chapter: Our involvement in theatre.
Posted by paul howley at 6:24 AM