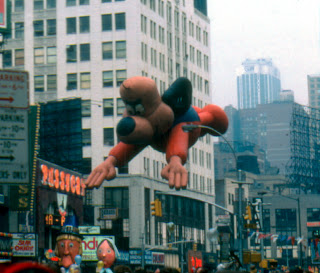 MY LIFE WITH COMIC BOOKS: THE HISTORY OF A COMIC SHOP-Part 111

For Thanksgiving of 1996, we decided to travel to New York City to watch the 70th Annual Macy’s Day Parade, in person. Cassy had never been to see the parade and although we had taken Adam there when he was a toddler, he didn’t really remember much about it. It was a tradition for our family to watch the parade on television each Thanksgiving but this would be so much more fun. Traveling became easier and more pleasant as our kids got older.

Elsa, our travel agent, booked us into a hotel that was very close to the parade route and it was an easy walk to Broadway and Times Square. As usual, the prices in New York City are outrageous and this was one of the most expensive hotel rooms I’d ever had but it would be worth the expense to enjoy some fun “family time.” Often, we would encourage our kids to each invite a friend to come with us on our trips but at this stage in his life, Adam was really only interested in bringing his “girlfriend” Meridith as his guest. Mal and I both liked Meridith but we knew that if Adam had his girlfriend with him he’d ignore the rest of us. Her presence would significantly change the dynamics of our family trip so we decided to just go as a family with no “extra” people.

We drove our mini-van the five hours to New York City and Cassy was surprised to see how run-down the city appeared. She was a bit frightened by big cities at that time while Adam loved the excitement and opportunities that big cities offered. Adam frequently ventured into Boston to explore the city with Meridith and his best “guy” friend from high school, Phil Doreau. The aggressive drivers or the poorly designed roads of Boston didn’t intimidate Adam even though he was an inexperienced driver.

After we checked into our hotel room we walked to the discount ticket center to see which plays were playing on Broadway. Adam wanted to see something new and “edgy” since he had become sort of a “Broadway Snob.” He looked down on almost any play that was commercially successful. Originally, Adam was willing to work as an actor in film and television if the opportunity came up but since he fell in love with Meridith he had pretty much given up on any type of acting other than live theater. I used to explain to Adam that I believed that there needed to be a combination of business and art in order for the artist to effectively reach an audience with his work. Adam would reluctantly agree with me. On this day however, he had no choice since I was paying for the tickets. We eventually chose the revival of “Show Boat.”

The play was great (even Adam liked it) but I was mostly impressed with the gorgeous scenery and the ease with which each scene change was accomplished.

We got up early the next day to get a “prime” spot to watch the Macy’s Day Parade. We were stunned to feel the bitter cold wind whipping through the streets of Manhattan. The temperature was a record 21 degrees and we were freezing cold for almost two hours while we were waiting for the parade to begin. By the time the parade actually started, the sidewalks and side streets were jammed with thousands of people. We watched colorful floats, marching bands, and the helium-filled giant balloon figures of Underdog, Bullwinkle, The Pink Panther, and many more. But the most memorable part for my kids was the float with people throwing packages of a new product by “Ocean Spray” called “Craisins,” which were sweetened dried cranberries. We must have eaten a few dozen packages of them! For many years, I intended to try giving away free comic books from a float in Worcester’s huge Saint Patrick’s Day Parade but it seems to slip my mind every year.

About an hour after the parade started, our feet, hands and faces became almost numb with cold, so we went back to our nice, warm hotel room to watch the rest of it on television.
Posted by paul howley at 5:27 AM