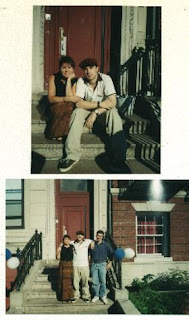 MY LIFE WITH COMIC BOOKS: THE HISTORY OF A COMIC SHOP-Part 135

My wife, Mal, and I, brought Adam to college at The Boston Conservatory. We filled our minivan with a large portion of his possessions and helped him set up his dorm room that he shared with three other guys. The college was in the heart of Boston, and although I wouldn’t enjoy living there, Adam loved it. After spending most of his life in a very rural town in Massachusetts, he was excited about the many possibilities in a large city. Surprisingly, I wasn’t upset about Adam going away to college. I knew he could probably take care of himself and we had a close enough relationship that he knew he could come to us if he needed anything. Our only request was that he was to call us, collect if he needed to, at least once a week.

Our daughter, Cassy, was now involved in her freshman year at Laconia Christian School in Laconia, New Hampshire. She missed her friends from Massachusetts and she didn’t enjoy living in our small rented condo. She spent hours crying and almost begging us to let her go back to Massachusetts. We explained to her that we truly believed that this was where we were “meant to be.” We encouraged her to appreciate all that this new school had to offer, including a good after-school sports program for girls that featured volleyball, basketball and cheerleading. Cassy had wanted to be a cheerleader since she was a very young girl and now she had the chance to do it. We all needed to make the best out of this new time in our lives.

We knew Cassy was sad that this school didn’t offer any Drama program, so Mal and I discussed the possibility of volunteering to start such a program. I felt confident that I could direct a school play and I knew that Mal and my sister Sharon could design the costumes. How difficult could this really be?

I met with the principal, Mr. Borchers, and explained that I felt there was a need for a drama program at the school. The school offered several sports programs but there were limited opportunities for students interested in “The Arts.” He told me that it had been tried before and that although the plays were good, not too many students seemed interested enough to continue doing plays. Usually there would only be a handful of girls interested and that made it too difficult to produce quality performances. I knew I had learned quite a bit about producing a play by watching my kids as they participated in plays throughout grade school and their community theatre involvement. I suggested that we produce the play “Annie” because it was a steady “crowd-pleaser” and since Cassy had been in it before, I could count on her help. I urged him to let me try it my way and assured him that I’d keep him informed of things as they developed. By the end of our conversation, I had convinced him to let me try it. Mr. Borchers gave me a phone number of another parent who had also volunteered her time if the school ever decided to produce a play. I called her and this was my first experience with Brenda Carney. Looking back, even though we had help from many parents, we couldn’t have done this play without her!

Next chapter: The audition process.

Pictures: Adam's first day at The Boston Conservatory.
Posted by paul howley at 10:35 AM