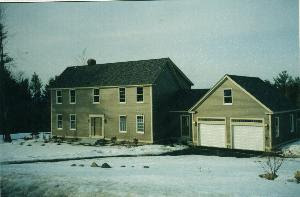 MY LIFE WITH COMIC BOOKS: THE HISTORY OF A COMIC SHOP-Part 138

After living in a small condo for almost six months, (and not enjoying it) we decided to start looking for a house to buy. Unfortunately, we still owned our home in Bolton, Massachusetts and a lot of our money was tied up in it. We decided to try to sell it.

We contacted a few local Massachusetts real estate agents and decided on a local woman who was friendly and serious about selling our house. We agreed on a commission, negotiated a shorter term for the exclusive “right to sell” and signed the brokerage contracts. Within eleven days we had an offer that we accepted. The potential buyers were from California and they had an expensive home that they needed to sell in order to buy our house but our agent talked with their agent and was assured that the house in California would sell very quickly. We were pretty excited that our house “sold” so fast. Our agent stopped marketing our house because we were all confident that the deal was certain to go through as agreed. A few weeks went by and our buyers still hadn’t gotten any offers on their house in California, so they lowered their “asking price” on it. A few more weeks passed, still with no offers, so they lowered the price again. Eventually, after we took our house off the market for almost two months, the asking price of the buyer’s house in California had been reduced so far that they no longer would qualify to buy our house. We learned a valuable lesson from this experience and from then on, we would keep marketing our home even if we had a signed contract, just in case the sale fell through.

Within a few days after we relisted our house, we had another full-price offer. The young couple loved the house although it seemed to us that this was an expensive purchase for first-time homebuyers. They hired an inexpensive home inspection company that they found on the Internet to do the inspection. This inspector was unprofessional and lazy and turned in a report with vague comments about the roof, appliances and heating system, stating that these items were seventeen years old, without mentioning that they were all still in very good condition. This made the buyers nervous and they asked to be released from the purchase agreement. We allowed them to cancel the purchase and within a couple of weeks we had another full-price offer.

The next couple had come to look at the house a couple of times and really loved it enough to sign a contract to purchase it. On one of their visits, Mal and I were there while they were looking and we noticed that their four-year old daughter was out of control, running around the house, opening drawers, and paying no attention to her parents’ plea for her to calm down. The mother was a former Olympic-hopeful swimmer, and although both of the parents loved our swimming pool, they were concerned that their kid would fall into the pool while they weren’t looking. We explained that the door from the house had a deadbolt lock, and then the child would need to walk across our large deck, go down a set of stairs, walk across part of the lawn, and go down two sets of stairs before she would be near the pool. It would be very difficult for the daughter to get to the pool area without the parents being aware of it. Despite our efforts to convince them that the daughter would probably be safe, they asked if we would let them cancel their agreement to buy our house, and we let them.

Our real estate agent assured us that she’d keep trying until she got the house sold for us. The real estate market was very strong and there were more buyers than sellers so home prices would continue to escalate making our house an even more attractive investment for someone.

Mal and I found a real estate agent in New Hampshire to show us some houses in the Laconia, New Hampshire area. We looked at cheap ranch-style homes and small “capes” but Mal fell in love with a beautiful reproduction of a farmhouse from 1790. Mal loves antiques and old houses while I like brand-new homes that don’t need constant upkeep. This house had the best of both worlds for us. Since it was only about five years old, everything was in great condition but it looked like the actual antique home that it was copied from. The owners had tried, unsuccessfully, to sell it a year earlier, for a little over $500,000 but the market in this part of New Hampshire was a bit slow at that time so they had just lowered the price to $429,000. This was still too high for me. I believed that I would also have a tough time trying to sell this house if we decided to move somewhere else because buyers who love antique homes aren’t necessarily interested in reproductions and most other buyers are interested in homes with a more modern style with larger kitchens, white walls, and a Jacuzzi tub in the master bathroom. Mal reluctantly agreed and we continued our search for a new home.

Our real estate agent in Massachusetts, doing her best to sell our house, asked if she could paint our master bedroom. It was painted a vivid burgundy color that Mal and I liked but it could “turn-off” potential buyers. She painted it with two coats of white paint and the next couple that came to look at the house made us another full-price offer. We nervously waited for the required home inspection and septic system test to be completed. We had been through some emotional ups and downs with the three previous buyers and we were hoping for a mutually satisfying conclusion. Things looked good but we would have to wait for almost sixty days to “close” the deal. In the meantime, our New Hampshire agent took us to see a house in Gilford, New Hampshire.

This house had been custom-built for an executive at a nearby company and the night before he had planned to move in he was “laid off” from the company. Part of his negotiated lay-off package was that the company had to buy the new house from him, so when we were shown the house, it was owned by the company and they were eager to sell it. Mal wasn’t excited about this house but I knew the moment I walked in that I wanted to buy this house. It was a brand-new, two-story colonial style, four bedroom, three-bathroom home with a partially finished basement with more space than we really needed. I liked the clean, white walls, nice white carpeting, and the wood floors in the kitchen, dining room and foyer. Mal just thought the house was boring with no character. I knew it would be easy to resell when it came time to move.

The company was asking $329,000 for the house, but sensing some eagerness to sell on their part, I offered $282,300. (Feel free to ask me about how I came to such an uneven price.) They accepted our offer but they insisted that we had to “close” within two weeks. I didn’t have the cash to pay for this house so I needed to get a very quick loan. I went to Laconia Savings Bank, and although I had no account with them and had never done any business with them, I asked them for a loan of $211,000. I explained that I was self-employed and all of my tax records were in storage in Massachusetts, so I couldn’t provide confirmation of my income. I told the loan officer that we owned a home (with no mortgage) in Massachusetts that was under agreement and that within three months it should be sold. I also explained that I’d need the money within a week. Eleven days later, we were moving into our new home. It was pretty amazing that, in that day and age, a bank loan officer would be so accommodating.

I made several trips in our Dodge Caravan with boxes of our fragile and personal things to the new house and hired a friend of a friend in the moving business to bring two twenty-six foot trucks of our stuff from the house in Bolton Massachusetts to our new home in New Hampshire.

Shortly after we moved in, the deal on our house in Massachusetts was finally completed. We used part of the money to pay off our loan on the New Hampshire house so that we were “debt-free” again. The house that we raised our children in was now just a memory but I didn’t have any regrets about selling it. The most difficult thing was realizing that we would now be living so far away from the many friends that we had made during our time in Massachusetts. Even though we were only one hundred miles away, we knew we wouldn’t be able to get together with our old friends very much. I also wouldn’t be visiting my comic book and collectible stores very often anymore. I was confident that the manager knew what he was doing so I wasn’t too worried. That would soon change.

Next chapter: My company manager must go!
Picture: Our new home in Gilford, New Hampshire
Posted by paul howley at 5:10 AM