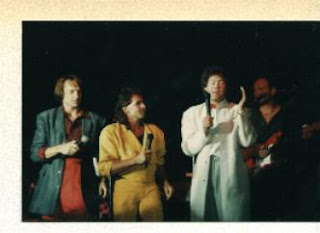 MY LIFE WITH COMIC BOOKS: THE HISTORY OF A COMIC SHOP - Part 43

As a twelve-year-old, my favorite rock and roll bands were The Beatles and The Monkees. I know that seems strange since these two bands were very different. The Beatles were very creative and wrote their own music. The Monkees were really only actors pretending to be musicians. But there was something special about The Monkees. Perhaps it was just the television show hyping them each and every week or maybe it was the fantastic songs written by many of the most successful songwriters of the 1960’s including Neil Diamond, Carol King, Neil Sedaka, Tommy Boyce and Bobby Hart. Whatever it was, they were really my favorite band. I had all of their albums and many of the toys and trading cards made with their pictures on them. I bought lots of the teen magazines that featured articles and photos about The Monkees. I didn’t have a chance to see them in concert because we lived so far from any of the cities that they played in from 1966-1967. The Monkees broke up around 1969 so I figured I’d never get to see my favorite band perform live. That all changed in 1986.

A customer from my comic book store told me that three of the original members of The Monkees were reforming to celebrate the 20th anniversary of the television show. Mike Nesmith didn’t need to tour with them because he was still living off of the huge inheritance from his Mom’s creation of “Liquid Paper” but Davy Jones, Micky Dolenz and Peter Tork were going to be at The Hampton Beach Casino club about an hour away from Worcester. So my wife, Mal, and my good friend and fellow Monkee fan, Kevin Simpson, joined me to see the concert. The concert also featured other bands from the sixties including Herman’s Hermits, Gary Puckett and The Union Gap, and The Grass Roots. We had great seats, dead center, about fifteen feet from the stage. When The Monkees began their set of songs it was obvious that they were enjoying this new chance of regaining their stardom. They seemed like they were having a fun time and the audience loved them. I was so thrilled to finally get to see the band that gave me so much pleasure when I was a kid.

When the show was over I was disappointed that we didn’t have tickets for the late show that evening. My friend Kevin also wished we could see them again. We went outside and we saw hundreds of people waiting in line for the next show. It didn’t take long for us to buy some tickets from a “scalper”. We didn’t have good seats but it was certainly worth the extra money to see them again.

Now, I’m sure you’re wondering what this has to do with my life with comic books and the history of my comic book store. You’ll have to trust me for a little while longer…it really is all connected!

Next Chapter: Serious illness strikes!
Posted by paul howley at 6:26 AM