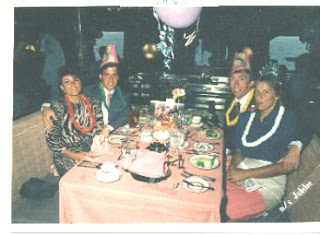 MY LIFE WITH COMIC BOOKS: THE HISTORY OF A COMIC SHOP - Part 55

In the mid-1980’s the average customer of my comic book store was a male between the ages of twelve and fifty. My store was in a rough section of the big city of Worcester so not too many women came to the area. My main product line was comic books and not too many women read comic books in those days. But occasionally we had some female collectors. Marvel Comics published a comic book of The X-Men that appealed to men and women alike and we had two teen-age female fans that shopped at my store each week. They almost always came to the store together and they’d laugh and joke with us. They were very outgoing. One of the girls, Christine, had purple hair. Paul Dinsdale, my good friend and customer, noticed her right away. Paul spent a lot of time each week visiting me and hanging around with some of the other “regulars” at the store. He loved getting beaten by me in Chess and the strategy game of Risk so we’d try to play a few days a week. He’d listen to my employees, David Lynch and Pat Donley, as they interacted with Christine. He knew she had a good sense of humor and he liked the idea that a woman was enjoying comic books. Paul wasn’t dating anyone at the time and it was obvious that he was “interested” in Christine. He was just a little bit too shy to ask her out on a date.

One day, after Christine paid for her comic books and walked out of the store, Paul Dinsdale remarked that he’d like to ask her out. I said, “ Watch the store for a minute!” I ran outside and caught up with Christine before she drove away. I told her that Paul was the tall thin guy in the store. I told her that he was kind of shy and explained that he’d like to take her out on a date. I also assured her that he was a “gentleman” and he’s relatively harmless. She agreed to give him a try. I gave “Dins” her phone number and they began dating. Paul and Christine began dating in 1987 and got married in 1993. For some reason, they invited me to be part of their wedding.

At home, my wife and kids were busy with school for Adam and dance lessons for Cassandra. During the summer months Mal would take them to a local town pool in Clinton for swimming lessons. They’d be there four or five days each week and both of our kids loved to swim. I’d join them after work. Although Mal enjoyed taking the kids to the pool, we both agreed that it would be much nicer if she didn’t have to pack up all of the stuff and drive all of the way to Clinton to cool off. We started planning to have a pool installed at our home in Bolton. We hired our friend, Paul Weatherbee, to clear about half an acre of dense trees to make room for our new pool. We also hired our friend, Allan Traylor’s brother Danny, to prepare the area by leveling the ground and removing the tree stumps. We hoped that we could afford to have the actual swimming pool installed the next year.

Our friend, Debbie Traylor had been fighting cancer for quite a while now but she had reacted well to a new chemotherapy and seemed to be winning the battle. In 1988 we all decided to go on a cruise together. We were such good friends that we thought we would be comfortable enough to stay in the same cabin together. We had vacationed together for years and we always had a great time. This trip was no exception. This was the first cruise for Allan and Debbie and they had a good time but Debbie seemed exhausted. She would sleep late and frequently take a nap. We didn’t mind because we were just happy that she was going to beat the cancer and we were glad to all be together.

When the trip was over Debbie went to her doctor and found out that the cancer had spread again. Eight weeks later, Debbie died. Mal lost her best friend. Allan lost his wife. Five-year-old Peter lost his Mom.

Picture: Our final vacation with our friend, Debbie Traylor
Posted by paul howley at 4:52 AM