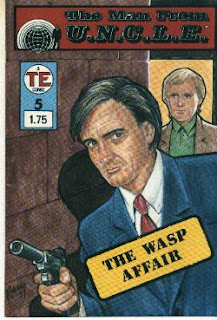 MY LIFE WITH COMIC BOOKS: THE HISTORY OF A COMIC SHOP - Part 49

In 1987 my wife, Mal, and I went on our first real vacation without our two kids. We were on a seven-day Carnival cruise to the Caribbean and we both thought that we’d have a great time without Adam and Cassandra. We were surprised to find that we couldn’t stop thinking about them. We kept thinking about how much fun they’d have in the swimming pool and on the water slide. We knew they would love the great food because they both enjoyed trying different things. We watched young kids playing and actually wished that our children were with us! When we got home we immediately booked a cruise for the whole family and six weeks later we were cruising to San Juan, St. Thomas, and Bahamas. We didn’t book this trip through AAA because we were unhappy that they charged us “full brochure price” for our first cruise. We found a travel agent who got us a price for all four of us that was cheaper than the first cruise was for just Mal and I. Our kids loved this vacation. They got involved with the supervised kids program that Carnival offers and each morning they were excited to get together with all of their new “friends.” They would play all day and we would all get together as a family for lunch and dinner. When the ship would dock at an island we’d tour old forts and historic sites, swim in the ocean, and go shopping together. Cruising is a great family vacation. For years, even though we all loved to go to Disney World, when we’d ask the kids what they’d like to do for a vacation, they’d chose a cruise. (Usually we’d go to Disney World each year too!)

In the last chapter I told about the beginning of my comic book publishing of The Man From Uncle. What I neglected to mention were the other comic books I published. Two customers from my store approached me with an idea for a three issue “mini-series” titled “Forever Now.” Chris Coleman and Dan Courtney had previously written and drawn some issues of our “in-store” amateur comic book of “Insect Man” and I liked their style so I agreed to publish this new series.

David M. Lynch and Skip Simpson had an idea for a comedy super-hero series called “The Bird.” I loved David’s writing and I knew that Skip was a very talented cartoonist so I agreed to publish this comic book.

My cousin, Steven, introduced me to Mark Marderosian. Mark was a writer and artist who had come up with an idea for a new comic book series that would feature a strong female character named “Delta Tenn.” She was a big city policewoman whose adventures were set ten years in the future. Mark was very talented and professional and he offered to present me with a new issue all ready to be printed once every two months. It required almost no work on my part so I agreed to be his publisher.

My agreement with each of these creators was a fifty-fifty split on all profits. I would handle all of the marketing, printing, shipping, and billing. They needed to deliver their work on time and they all did. Especially Mark Marderosian. Mark also helped me with my “main” comic book series, “The Man From Uncle” by doing the mechanical layout of many of our front covers. Beginning with issue number seven of The Man From Uncle we started using photographs from the old television series and Mark hand-colored old black and white photos for us. This was before computers made this an easy task! He was a great guy to work with.

We worked with a lot of writers and artists on our Man From Uncle series and most of them were able to meet their deadlines. We would always ask them to set their own schedule. Some artists could draw an entire issue in thirty days but other artists worked a little slower or were doing this while they worked a “real” full-time job so they would agree to finish their issue within sixty days. I was agreeable to the artist’s time schedule because I had several writers and artists working on issues all at the same time so I could wait and publish their work when it was finished. Things were going fine until I hired a good friend of mine to draw issue number five.

Kevin Burns was a customer of my comic book store and he was a lot of fun to be around. We’d spend hours laughing together when he’d stop by the store. He was a serious toy collector and had a love of old classic television shows including “The Munsters” and “Lost In Space.” He worked full time at Twentieth Century Fox and he was a very busy man but he assured me that he could draw the entire issue within sixty days. He drew the cover first and I was “blown away” by it! It was (and still is) my favorite cover for the entire series. He perfectly captured the look and style of Napoleon Solo and Illya Kuryakin that we wanted for our series. They looked like the original actors but with a slightly updated sense of style. I now knew that Kevin was capable of turning in our best issue yet.

With his repeated assurance of completing the project on time I paid Kevin in advance and eagerly waited for the finished artwork. I sent in the information and a picture of Kevin’s gorgeous cover artwork to all of the distributors so they could begin the two-month process of getting the orders from the retailers. When the order came in it was for only 10,000 copies but I knew that when the retailers saw the finished comic book they would be encouraged to order more of our future issues because the quality had improved so much. I also knew that the Man From Uncle fans would love Kevin’s work. But for some reason, Kevin was unable to deliver the artwork on time. Months went by. Finally the comic book was so late that the distributors required me to cancel their original orders and resolicit new orders. When the new order came in it was for only 8000 copies.

After about five months I received the artwork from Kevin and it was great. I was proud to publish this and I thought it was our best-looking issue to date. It was our lowest selling issue so far but the fans loved it and we got quite a few complimentary letters. I learned a lesson with this experience. I would no longer assume that artists could reasonably predict how long it would take them to complete the project so I’d just wait until it was completely done before I would solicit orders from the retailers.

I decided to go to “Spy-Con,” the biggest television and movie spy-related convention in the United States. I flew to Chicago and spent three days mingling with friendly Man From Uncle fans and spent some time promoting our comic book series. I wanted this publishing venture to be successful. I even ran advertisements in the major comic book retailing publication offering hundreds of free copies of our publications to try to stir up interest. I hoped that if the retailers gave these free copies to their customers, a portion of the readers would enjoy the series enough to buy the new issues. This publishing idea was part of my plan to accumulate enough money so that I could retire before I was forty years old. Despite my efforts, sales did not increase enough.

Next chapter: Hollywood buys the option to produce a movie based on our comic book series, “Delta Tenn!”

Picture: The Cover of The Man From Uncle comic book # 5, drawn by Kevin Burns
Posted by paul howley at 5:53 AM