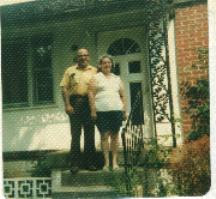 MY LIFE WITH COMIC BOOKS: THE HISTORY OF A COMIC SHOP - Part 44

My wife, Mal, and I are both from very large families and we had been fortunate that most of us were quite healthy. Mal had tumors in her left eye that eventually left her blind in that eye but other than that every one seemed healthy. Mal’s father, Richard, had a major heart attack when he was only forty-eight years old but he had recovered and he seemed to be doing okay. Most of our close friends were young and healthy too. That all changed in the mid-1980’s.

Our close friends, Allan and Debbie Traylor, were told that Debbie had cancer. We were all shocked because Debbie seemed to be in such great physical condition. She took good care of herself. She exercised and ate the “right” foods. The way Allan and I ate you’d have assumed that if someone were going to get sick, it would be one of us. But not Debbie. Debbie went in for surgery to remove the cancer tumor in 1986.

Mal’s mother, Madeline, had to find a new doctor because her regular doctor was retiring. So on a Friday she found a new doctor because she needed to refill her blood pressure medication. This new doctor found that Madeline was retaining fluids and her blood work came back abnormal. He wanted to admit her to the hospital on the following Monday for additional testing. The day before she was to go to the hospital Richard suddenly had another heart attack and was admitted to the intensive care unit of Marlboro Hospital. His condition was serious but he was stable. The next day we brought Madeline in for her tests and it was discovered that she was actually quite ill. She began bleeding from her esophagus. The doctors considered her condition very serious. We were all told that she probably wouldn’t live for more than a week. We were advised to not tell Richard that his wife was in serious condition because the doctors were afraid that it could trigger another heart attack. We all felt bad that Richard wasn’t aware of Madeline’s condition. Eventually the doctors decided to tell him. Richard had more heart attacks. Almost miraculously, Madeline responded to some medication and survived. She was released but she was still very sick.

Richard was finally released from the hospital and he came home to begin the long process of taking care of his wife. He still had to work so it was up to his children to care for Madeline as their schedules allowed. Most of their children were grown up with families of their own and they either lived far away or had the responsibility of full time jobs. Madeline’s two youngest children, Carol and Maddy, were still living at home so they were able to take care of her at night but they both worked full time jobs during the day. Madeline’s oldest son, Dick, lived nearby with his wife Diane. Diane and Mal were “stay at home Moms” so they worked together to take care of Madeline.

Madeline’s condition worsened and in January of 1987 her doctor recommended that she should go into a rehabilitation center to regain her strength. He thought that she’d only be in the nursing home for a couple of weeks. We all looked forward to her coming home. We visited her almost every day during her first two weeks. She was very alert and talkative but she was in a lot of pain. Then we got the phone call. She had slipped into a coma. The doctors didn’t know why. She remained in the coma for almost three weeks until one day, when the whole family was at her bedside, she woke up! Even though she was in pain, she spoke with everyone and told all her children that she loved them. A week later she went back into a coma. She died on February 18, 1987.

For the entire fifteen years I had known my in-laws they had been looking forward to retirement together. They had lived a very simple life. All they wanted was to buy a small home in Maine, buy a new Cadillac, and get a dog. Richard had retired from his union truck-driving job three months before Madeline died. This profoundly affected me. Mal and I decided that we wouldn’t “put-off” enjoying life for some future time that may never come. I began to develop a long-range plan at my comic book store so that I could stop working by the age of forty. I loved working at my store but I knew that I wanted to spend more time with my wife and children if it could be arranged.

Next chapter: Our dear friend Debbie has a relapse.
Picture: Mal's mom and Dad
Posted by paul howley at 5:59 AM