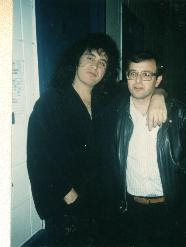 MY LIFE WITH COMIC BOOKS: THE HISTORY OF A COMIC SHOP - Part 50

In 1987, I was publishing a comic book series created by Mark Marderosian titled “Delta Tenn” when we received an inquiry from Gene Simmons, the lead singer of the rock band KISS. He was interested in buying an “option” to produce a feature film or television movie about Delta Tenn. Gene’s girlfriend was actress-model Shannon Tweed and he thought this would be a perfect role for her to play. An “option” is purchased to acquire the exclusive right to use the character and ideas in a movie or television show for a specific period of time. The amount of money is negotiated between the owner of the property and the interested buyer. In the case of Delta Tenn I was merely the publisher.

Mark was the creator and our agreement was that he would own the film rights and merchandising rights to his character. Mark negotiated a reasonable six-month option fee with Gene Simmons and had an attorney draw up the legal documents. Through some smart negotiating, Mark was able to keep the merchandising rights for himself so that if this Delta Tenn project ever got made he’d be able to market trading cards, t-shirts, posters, toys and action figures and keep the money for himself. Initially, Gene wasn’t too happy with this but he finally agreed. I was eager to continue publishing the comic book series because I knew that sales would jump if there were a movie or television show of Delta Tenn.

Gene approached some of the networks with the Delta Tenn concept and although there was some interest, none of them seemed eager to offer the substantial amount of money necessary to produce a film or TV show. Gene Simmons and Shannon Tweed continued to search for an interested network and when their option on Delta Tenn expired they paid to renew it for another six months. Shannon had recently been a guest star on “L.A. Law,” “Hooperman,” and “Cagney and Lacey” and was a more recognizable actress. She believed that they would eventually find someone to produce this film. She even made an appearance on “The Late Show” starring Ross Schaeffer to promote the idea.

During this second option period, Mark was approached by Sybill Danning’s “people” expressing an interest in Delta Tenn. Sybill Danning was a beautiful actress who worked in numerous science fiction films in the 1970’s and 1980’s including one of the “Conan the Barbarian” movies starring Arnold Schwarzenegger. Her agent was sure that Delta Tenn would be a great movie for Sybill to star in. Mark explained that the option was now owned by Gene Simmons. Sybill’s people contacted Gene to see if the option could be bought out, but Gene declined their offer.

Mark also received a call from the management of Brigitte Neilson, the wife of Sylvester Stallone. They had written a short “treatment” for their version of a Delta Tenn movie and it was typical Hollywood! Mark’s version of Delta Tenn was set ten years in the future in New York City. Delta was a tough, leather-clad policewoman. Hollywood’s version changed the whole character. They wanted it to be set in current time and she’d be a jeep-driving, bikini-wearing Malibu beach cop! All they really wanted to keep was the name, “Delta Tenn!” They were willing to pay thousands of dollars to buy out Gene Simmons option and then spend millions of dollars on the feature film but they wanted to change almost everything about the character. They claimed that they could be ready to begin filming within a few months if Gene would accept their offer. Before a deal could be arranged, Brigitte was diagnosed with cancer and the project was off.

Gene paid for a third option period. He assured us that a deal was being considered by a major network. It wasn’t long before we got the good news. The project was going to be a joint production of Touchstone Pictures and NBC-TV. Touchstone was a highly respected film company and NBC-TV was the number one network at the time. The script was being written as a two hour TV movie by the author of the hit movie, “Two Men and a Baby”. If the TV movie did well in the ratings it would become a weekly television series. Mark would be a wealthy man when this project was finished.

NBC-TV was preparing to send a production crew to Canada to begin scouting for a filming location. Filming could begin within a few weeks.

Pictures: Mark Marderosian with Gene Simmons of Kiss
Posted by paul howley at 2:03 AM