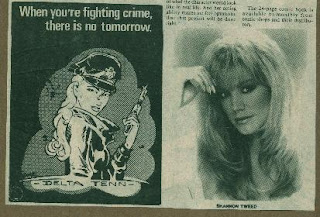 MY LIFE WITH COMIC BOOKS: THE HISTORY OF A COMIC SHOP - Part 51

We got the word from Gene Simmons (of the rock band KISS) that NBC-TV was sending a pre-production crew to Canada to scout for locations to begin filming the two-hour TV movie based on the “Delta Tenn” comic book series that we were publishing. Filming would begin within a few weeks. If this TV movie got good ratings it could possibly become a weekly television series and the creator of “Delta Tenn” would make a fortune in option fees and merchandising. The creator, Mark Marderosian, was one of the nicest guys I’d ever worked with and he deserved all of this success. I was happy to be publishing the comic book series because I knew that we’d sell more comic books once the TV show was broadcast. Then we heard the bad news. A few days before the pre-production crew was scheduled to leave, NBC-TV had a visitor to their offices. Steven Bochco, creator, writer, and producer of popular TV shows including “Hill Street Blues,” “Doogie Howser MD,” and “L.A.Law” pitched a strange idea for a new television show to the network called “Cop Rock”. The idea for the show was that it would be a serious police drama that had many of the characters spontaneously break into song! It sure was a different idea for a show! The network certainly didn’t want to upset Steven Bochco so they agreed to do his show. They dropped “Delta Tenn” and produced “Cop Rock.” “Cop Rock” turned out to be the biggest flop of the season.

Gene Simmons and Shannon Tweed decided not to renew their option on “Delta Tenn.” Sales of the comic book series weren’t high enough for me to justify continuation, so Mark Marderosian “self-published” a few issues. The “Delta Tenn” series ended with issue #11.

With my comic book publishing ended, I knew I’d need to come up with some other way to earn extra money so that my goal of early retirement could be achieved. My father had just recently been experimenting with investments in the stock market, primarily in “index options”. He had read some books about this type of investment and although there were risks involved it seemed interesting. It was basically “betting” that the stock market S+P Index would rise or fall. I really don’t understand how this worked, but at the time it seemed to make some sense. I thought it would be fun (and probably profitable) to try this type of investment with my father. I always enjoyed spending time with him and this would be something we’d have in common. My uncle Jim (my Dad’s brother) also decided to invest in these index options. We met with Gary Cohen, a broker at a local office of Merrill Lynch and we opened our investment accounts. He assured us that we could limit our potential losses by placing a “stop-loss” order with his firm. If our losses ever reached $2500.00 he would “automatically” get us out of that particular option. At that time my wife and I had saved $100,000.00. I didn’t want to risk all of that so we opened the account with $50,000.00 and began the index option trading.

In the first few weeks I profited about $12,000.00! My Uncle Jim and my Dad were also making money. This seemed pretty easy. Certainly easier than working at my comic book store.

Next chapter: The big stock market crash of October 1987.

Picture: Shannon Tweed as Delta Tenn
Posted by paul howley at 5:17 AM