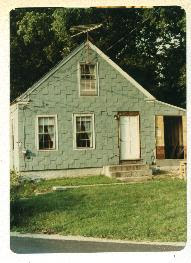 MY LIFE WITH COMIC BOOKS: THE HISTORY OF A COMIC SHOP - Part 15

It had been two and a half years since we’d moved away from our family and friends. We had lived in Nashville, Tennessee and Dayton, Ohio, worked with Gary Walker and learned how important it was to care about your customers, worked with Jay Maybruck and learned a lot about marketing and pricing strategies, traveled to dozens of places including Chicago, Atlanta, San Diego, New York, New Jersey, and met hundreds of interesting comic book creators and collectors. But we missed our family and friends.

Mal and I had been married for five years now and we wanted to settle down. We wanted to move closer to family. Most importantly, we were considering having children. Unfortunately, the prices of homes in Massachusetts had risen sharply. An average three- bedroom home now cost about $60,000.00.

Our friend, Warren Weatherbee, had been dabbling in real estate sales. He told us he knew of a house that could be bought really cheaply. While we were on a short trip to Massachusetts, we made an appointment to see the house but when we arrived we were told that we couldn’t see the inside. The outside of the house was a mess but the owners were only asking $16,000.00 for it. Warren assured us that the house could be fixed up so it would be livable.

When we got back to Ohio we made our decision. Without even seeing the inside of this small house, we made an offer of $15,000.00 cash for it. Since we knew the place was in rough condition, we didn’t need a home inspection and since we would be paying cash for it we wouldn’t be involved with the long process of obtaining a mortgage from a bank, and could complete the purchase very quickly. The owners accepted our offer. Warren took care of all of the details for us. Now we had to break the news to Jay!

When we told Jay that we wanted to move back to be with our family, I’m sure he wasn’t happy, but he supported our decision. Jay suggested that we’d remain partners if I could attend the five or six major comic book conventions each year. These shows were the most profitable part of our business and we both needed to be there. Jay would attend the smaller shows located near his home in Ohio and I’d either drive or fly to meet Jay at the big shows. This seemed like it would work for the both of us.

We hired a moving company in December of 1978 to bring most of our stuff up to Massachusetts, but we packed up our old van with my comic book collection, irreplaceable personal things like photographs, and our houseplants. We made it almost all of the way to our new home. We had pulled off of the highway to get gasoline at my friend, Ray Frank’s station, when the transmission died.

Ray Frank was an interesting guy. He had married one of Mal’s best friends from high school and we had become good friends and got together quite frequently. Ray was a great mechanic and an honest one. But he wasn’t cheap. His hourly rates were probably the highest in the area. He enjoyed playing the part of a grouchy, unpredictable, cranky guy, but I knew him differently. When Ray realized that I didn’t have the money to pay him to fix my transmission, he let me work at his gas station to pay it off. At the time, minimum wage was about $3.00 an hour. Ray gave me $6.00 an hour even though I was pretty useless at a gas station since I’m the most unmechanically inclined person I know. He also gave me a full set of snow tires as a gift. Many people just didn’t get to know him like I did.

Before we got up to our “new” home in Sterling, Massachusetts, a group of our friends, including Suisei Goguen and Debbie Traylor, decided to surprise us by cleaning up the inside of our run-down house. We heard that it was so bad that Suisei cried at the prospect of us living there. By the time we arrived it was still in rough condition, but it was clean. This house was about 100 years old and at one time it had been a railroad station. The house had a living room, dining room and kitchen, and one bathroom that had the toilet installed in the middle of the floor. The house had two bedrooms upstairs with no heat. The living room had no ceiling or sheetrock on the walls. The outside of the house was covered in old, broken asphalt shingles. It looked like a shack but it was all paid for and we were happy to be back.

Since we were planning to try to have a child, we realized it would be a good idea to get health insurance. Mal and I had gone three years or so without any insurance, but now we would have to be more “grown-up”. I didn’t think I could afford to buy insurance on my own, so we decided that I should get a job at a normal business that provided insurance as a benefit. This would work out because I really only needed to be available for five or six weekends each year to work the conventions with Jay, so I had plenty of time available for a “real” job. I got a job in the production control department of a company called Gen Rad in my old hometown of Bolton, Massachusetts. My job consisted of keeping a written record of the movement of materials in this large factory.

The people who worked in the office with me were very pleasant and I enjoyed working with them. The problem was, that almost every number I saw reminded me of a specific comic book issue! #247 was the “Adventure Comics” with the first appearance of “The Legion Of Superheroes.” #83 was the “Journey Into Mystery” comic book with the first appearance of “Thor.” #4 was the “Showcase Comics” issue that introduced “The Flash.” I had to keep telling myself that this job was important to us because we needed the health insurance. I had to stay here because Mal and I were now expecting a child!

Next chapter: …And we thought we were prepared!
Picture: Our run-down house in Sterling, Massachusetts before we fixed it up.
Posted by paul howley at 5:09 AM