My Life With Comic Books: Part # 4 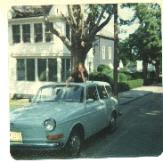 A brief introduction:
My name is Paul Howley, owner of the Eisner Award winning pop culture collector’s store known as “ That’s Entertainment ” in Worcester, Massachusetts. My store has been around for over twenty years and it’s been a long and interesting combination of events and people that have brought my store to its current place. I am not a talented writer, so please try to overlook my lack of writing ability. It is not my intent to boast or brag about my store or my life…I just want to tell you my story.

MY LIFE WITH COMIC BOOKS: THE HISTORY OF A COMIC SHOP - Part Four


In my last column I explained about some important developments in my “religious” faith and I told you that in this installment I’d be telling you about meeting my future wife. Before I get to that part of my story I need to digress for a moment.
In 1969, my Aunt Joan won some money ($1140.00) on a California television show called “Dialing For Dollars”. With this money, she decided to drive across the country to visit her relatives on the east coast in 1970. She brought her three children with her. Bob and his twin sister Sylvia were my age and my cousin Steven was 11 years old. They stayed in the New England area for the whole summer and it was really the first chance I had to get to know my cousins. Even though he was much younger than I was, my cousin Steve was more like me than his siblings. He was skinny, had long hair, was outgoing and played chess. But he didn’t read comic books. I let him read some of my comics and it didn’t take long before he was hooked. I gave him a copy of Amazing Spider-Man #3 and a coverless copy of The Avengers #8 and his interest in comic books exploded from there.

For some unknown reason (I must have been on someone’s mailing list) I started receiving “The Buyers Guide Of Comic Fandom” a monthly newspaper featuring dozens of ads of comic books for sale from all over the country. Steven and I would eagerly look forward to each issue of TBG. When his family returned to California, Steven spent lots of money buying old back issues at used bookstores and junk shops. Although California had some of the earliest comic book specialty stores in the country prices were not very consistent because there was no accurate price guide yet. Many comic dealers would just use the established prices of major mail order dealers like Howard Rogofsky and Robert Bell. Cousin Steven paid way too much for a lot of his comics! But it didn’t matter, because he just HAD to get his hands on as many comic books as possible.

In 1971, Steven and the rest of his family moved from California to Massachusetts to live permanently. We spent a lot of time together playing chess, playing Smess (a strange game similar to chess), discussing comics and playing poker. My father had taught me how to play poker when I was quite young and I usually would beat Steven when we played. We didn’t play for money. We usually played for comic books. I remember once when I started the day by winning his copy of The Silver Surfer #1 (from the 1960’s) and continued winning until I had won everything Steven owned! I mean everything! His entire comic book collection, all of his toys, all of his clothes (except the clothes he was wearing)….everything he owned! What a triumph! The next day he won it all back. I was never really going to take his stuff, but it was fun anyway. Playing cards was always fun for Steven and me. In a future column you’ll see how important it became.

In high school I dated a few girls. I really liked some of them. But in 1972 I took a bus ride with our Bible study group to a Jesus rally in Keene New Hampshire. It was during the peak of the Jesus Movement in the United States. I had been dating a nice girl for about a year and a half, but nothing prepared me for meeting Marilyn. I was sitting on the floor of the purple painted “Gospel Bus” and Marilyn (or “Mal” as she was called) was sitting in the seat near me with her 21 year old boyfriend, Alan Jones. Even though she was sitting with her boyfriend, it didn’t stop her from talking with me. I was stunned. She was really pretty and kind of flirty. I was a nerdy hippie-looking guy with long hair.

I was traveling with my younger brother Jay, who was 18 months younger than I. Even as young kids, Jay and I were quite different. Jay had childhood illnesses like asthma and he needed an eye operation to correct a crossed eye. Jay was more physical. Jay had muscles and I was a skinny guy. I enjoyed more cerebral things like movies, books and chess. Jay was more of a checkers playing guy. Although I was outgoing, Jay was musically inclined and was one of the lead guitar players at the Coffee Shop (now called Freedom Farm). Jay and I had an unusual competitive relationship. By the end of the bus ride, Mal convinced me to drive my younger brother over to her house. It didn’t take me long to realize that she actually was more interested in me than my brother, Jay. I felt bad for my brother because I know he kind of liked Mal. But it took me about 15 minutes to get over it. I was attracted to Mal and it wasn’t long before we were “going steady”. Within four months we were “pre-engaged”. Five months after that, we actually were engaged to be married! Jay got over it and moved on to other girlfriends.

It was at this time that I realized that I couldn’t afford to pay for gas for my car (it was an outrageous 27 cents a gallon back then!), car insurance, dating, and comic books. Something had to go. I needed the car. I was in love with the girl. Comic books had to go. So for about a year I stopped buying comic books. Cold turkey. I had really enjoyed my comic books but like many teens, girls and cars become more important. I thought I was finished with comic books forever.

In June of 1973 Mal and I got married. We rented a small apartment in Marlboro Massachusetts and I packed up all of my childhood toys and comic books and stored them in the attic. We had planned to honeymoon in Montreal Canada. I don’t have any idea why we chose Canada. Maybe someone we knew suggested it to us and we had never been there before. We packed up our 1970 Volkswagon Squareback station wagon and drove to Montreal. We were there for about 30 hours and both agreed that we didn’t like Montreal, so we turned around and drove the 1500 miles to Florida. We had very little money…just the money we got at our wedding. Everything we had saved for the last year had gone for furniture , our apartment deposits, utilities and our car. We were both raised to be conservative with money. If we couldn’t pay cash for something, we wouldn’t buy it. We didn’t have any credit cards because we were only 18 years old and in 1973 you had to be 21 years old to get a credit card.

We headed to the recently opened Disney World with about $250.00. We had no hotel reservations because we had expected to be in Canada not Florida. Since it was peak tourist season, most of the hotels along the way were full. We ended up sleeping one night on the side of the highway in Virginia. One night we slept in the car in a hotel parking lot. We stopped and spent a full day swimming and playing on rafts at Daytona Beach and both got so sunburned that we were sick with sunstroke. We recovered in a couple of days and made it to Disney World. In 1973, all that Disney World had to offer was The Magic Kingdom. The theme park was only a few years old and we both were amazed at how clean and organized it was. We were impressed by the technology in the attractions and transportation system. We were hooked on Disney World. Over the next 29 years we would spend 27 separate vacations in Disney World! (but I’ll explain the effect Disney World had on our lives in a future column)

After our two-week honeymoon was over, we arrived home with an almost empty gas tank and no money left. Our bank account was down to $8.00. We knew we needed to replenish our savings account so I continued working at Data Terminal Systems making the first electronic cash registers in the United States. Mal also got a job there, which worked out great because we only had one car and could ride together. We tried to do things together that didn’t cost money. Luckily for us, there was an independently owned movie theater that had movies for a dollar on Tuesday night. We spent a lot of time visiting friends and family.
One day when we had nothing to do, Mal said she was curious about my old comic books. I was happy that she seemed interested in my old hobby. When I brought the many boxes of comics down from the attic and spread them out on the apartment floor Mal said “Gee, they’re not in very good condition.” You see, in the 1960’s and very early 1970’s, most comic book collectors didn’t care about the condition of the comic books. We just wanted them to read and re-read. Some of my comic books were missing the front cover and some were missing interior pages. As long as it didn’t affect the story, a missing advertisement or superhero pin-up was okay. As a matter of fact, I remember cutting up some comic books myself when I was a young kid.

Most of the comic books that I had bought new at the local variety stores in the mid-late 60’s were still in almost perfect condition. I was careful with my comics when I handled them. But the ones I had bought second hand or had traded for ranged from poor to fair condition. Mal looked disappointed. “These are the comic books you were so proud of?”, she asked. “Why didn’t you buy nice looking ones?” Hmmmm…she doesn’t think my comics are childish!

It didn’t take much convincing for me to start buying comic books again. I had seen an advertisement in The Comics Buyers Guide for a comic book “convention” at The Statler Hotel in Boston. When Mal and I arrived at this convention we were stunned at the incredible selection of comic books available from the 1930’s to the 1970’s! The very first dealer we met was Donald Phelps. He had a complete run of Batman comics from #20-35 (from the 1940’s) in beautiful condition. I spent a whole weeks paycheck at the first booth!

Next column: Meet the early comic business dealers and Mal convinces me to sell some of my comics!

Pictures: My Cousin Steve and his family
Mal in our rare 1970 Volkswagon Squareback car
Posted by paul howley at 6:18 AM