My Life With Comic Books: Part 17 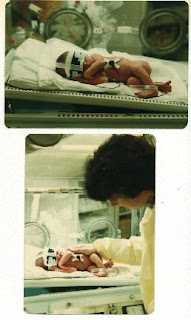 MY LIFE WITH COMIC BOOKS: THE HISTORY OF A COMIC SHOP - Part 17

Our baby wasn’t actually due for another seven weeks but we were now on the way to the hospital. The hospital we chose was 45 minutes away from where we lived. Mal was in labor throughout the night and on October 10, 1979, our son Adam Dean Howley was born. The day he was born there was a huge snowstorm. There hadn’t been snow this early in Massachusetts for over forty years.

Being born so prematurely, Adam was very small. He only weighed a little more than four pounds. His tiny lungs were not fully developed and he was jaundiced, but other than that he seemed okay. On the third day Adam stopped breathing. The doctors kept him alive somehow and put him on a medication to keep him breathing. It was very difficult for us to leave Adam in the hospital when Mal was discharged but we had no choice. We had figured that Mal and the baby would be in and out of the hospital within three days or so, so the long distance wouldn’t be a problem. As it turned out, we were mistaken. We had to make the long trip to the hospital every day to feed Adam. At first, because Adam was so weak, the nurses had to feed him with a tube down his throat. After a couple of weeks he was strong enough to eat without the tube. We would stay in the hospital for hours each day for the chance to hold him when the nurses took him out of his incubator. It was sad for us to see him with all of the wires attached.

After two weeks in the intensive care unit of Framingham Union Hospital, Adam continued to lose weight. He just couldn’t keep his food down. He now weighed only three pounds, eight ounces. The medicine that the doctors were giving him to keep him breathing was causing him to reject his food. The hospital policy was to keep the infants until they weighed at least five pounds. The decision was made to take Adam off of the medicine. Luckily, his breathing improved and he began gaining some weight and after three weeks in the hospital, Adam was allowed to come home with us.

Even though Adam was still very weak and tiny, I was committed to working at the biggest comic book convention of the year…the Thanksgiving Creation Show in New York City. This show drew the largest crowds in the country and they were big spenders. I hated leaving Mal at home with Adam, but I had no choice. We had appointments with our largest customers including the president of The Superglue Company, two major retailers from England, and a president of a regional Pepsi Bottling Company. I called Mal from New York as often as I could.

Shortly after the Thanksgiving convention, Jay came up with an interesting idea. He would rent space in shopping malls around the country. He wasn’t interested in selling product at these malls. He only wanted to buy collectibles there. He would put up a nice display of the types of collectibles we were willing to buy. He spent thousands of dollars on advertisements in local newspapers and local radio spots to inform people that he would be in the mall for one week to pay cash for their unwanted collectibles. People lined up with boxes and bags full of comic books, old toys, and baseball cards. Jay would buy almost every collection that he was shown. He would load the new purchases in his van and eventually ship everything up to Massachusetts where I’d get it all ready to sell.

The baseball card market was just starting to catch on and we soon had one of the best inventories of old cards in the area. Jay was able to buy so many cards at reasonable prices that we eventually began to “wholesale” many of the 1950’s and 1960’s cards to other dealers. I set up a display at a few of the early baseball card conventions in New England and we did quite well.

My youngest brother, Rick, was my best worker at these shows. He was only thirteen years old but he really learned quickly. He could assist the customers with their purchases and he was good with money. He would also basically run our booth while I was busy selling large groups of vintage cards to other dealers. Instead of payment for his work, he preferred to take baseball and basketball cards. At the end of one show he decided he’d take a gorgeous 1957 Willie Mays card as part of his payment. As he was slipping it into the protective plastic sheet he pushed a little too hard and folded the card in half! We still laugh about that today. Unfortunately, Rick outgrew his interest in sports cards and traded his cards to someone. If he had kept them all they’d be worth thousands of dollars now.

Jay’s buying trips were so successful that I no longer had space in my small house to store them. I knew that soon I’d need to rent some extra storage space. I had gone to the nearby city of Worcester, Massachusetts to see a comic book store called “Fabulous Fiction Bookstore”. When I was looking around in it one day, I overheard a customer say to the owner, “You’ve got a nice inventory here, but isn’t this comic book a little overpriced?” The owner of the store gruffly replied, “I’m the only store in town, so if you don’t like my prices you can get out!” I decided that if I were ever to open a retail comic book store, then this would be a good city to open in.

Next chapter: The traveling became too much to bear.

Picture: Our son, Adam Dean Howley is born!
Posted by paul howley at 6:58 AM