My Life With Comic Books: Part # 6 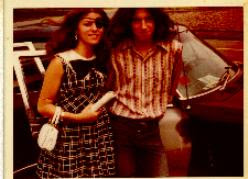 MY LIFE WITH COMIC BOOKS: THE HISTORY OF A COMIC SHOP - Part Six


After living in our first house for only six months, on a whim we put it up for sale and sold it for almost full price on the first weekend. Now we had to pack up all of our stuff again, including my growing comic book collection. We rented a three-bedroom apartment in Marlboro Massachusetts. One of the two extra bedrooms was needed for my huge comic book collection and one for my buddy, Harry Wilson, to live in. Harry had been the best man at our wedding and he needed a place to live for a while.

We knew we didn’t want to stay in an apartment for very long because we felt that we would be just throwing our money away on rent so we decided that we’d try to build a house. We bought an acre of land in Berlin, Massachusetts that bordered 700 acres of conservation land that could not be built on. We paid $7500.00 for this lot and found a builder to put up a small three-bedroom house for $19,000.00. Within three months we were moving in. Our friend Harry moved out and got married.

We continued to buy and sell comic books at the Boston comic book shows and we were actually making a decent profit while we were building up a good inventory. I quickly learned to be able to “spot” trends in the comic book market and capitalize on them by buying the comics from dealers who priced them too cheaply and reselling them to eager collectors. My wife, Mal, and I continued to work our normal daytime jobs. Mal worked as a secretary at a local computer company called Data General and I was still at Data Terminal Systems making electronic cash registers. Actually, since I am not mechanically inclined at all, I ran the shipping and receiving department. I loved my job. I started at this company when it was basically a “start-up”. Everyone involved in this company in the early days cared about the long-term success of the business. We all pitched in to help each other when it was needed. The company always paid me well, and every quarter I would receive a very generous bonus. Inevitably, as the company grew, the sense of “family” vanished. The vice president of manufacturing hired a guy to serve as my boss and we didn’t get along very well. I wasn’t enjoying my job anymore. I also felt that I was thought of as the young kid of the company even though I was now twenty years old. It was time for me to make a change.

In the 1970’s, Massachusetts was not an easy place to live for young hard working Republicans. Taxes were out of control and rising. Liberals like Ted Kennedy were pushing for higher taxes all of the time and the voters in Massachusetts were voting these politicians back into office over and over again. Massachusetts was called Taxachusetts for good reason. My wife and I were discouraged and so we both quit our jobs. We had monthly mortgage payments to make on our new house. Without jobs it would be tough to make ends meet. We were not making enough money selling comic books to pay all of our living expenses.

Our friends, Tim and Olivia Roberts had two children and one on the way and they agreed to rent our house for the amount of our mortgage and property taxes. Mal and I moved into the barn at The Freedom Farm. The owners, Paul and Barbara Weatherbee, didn’t charge us any rent. We were however, expected to help out a little bit around the farm. Mal helped by trying to keep the meeting rooms clean for the Bible study groups and weekly worship times. My job was to take care of the chickens. We kept the barn pretty cold that winter to help keep the heating costs down. The barn wasn’t insulated very well and on a cold winter night you could feel the wind blowing through the walls.

There was always a lot of activity at The Freedom Farm. People would come and go at all times of the day and night. Although we knew and loved most of them, we longed for the quiet of our own place again. After about four months in the barn, we rented a small two-bedroom apartment in Hudson, Massachusetts. I got a full time job in the shipping department of Prime Computer in Framingham, Massachusetts.

Mal didn’t want to re-join “the Rat Race”. We had been fairly successful selling comic books at the (now monthly) comic book conventions, so, after a short discussion, we decided to try to open our first comic book store. We figured that if we could make a profit at a once-a-month show, we’d make a fortune if we were selling comics six days a week! Even though we lived about 45 minutes away, we wanted to open the store near Boston because we knew we’d need a large population as a customer base. There was already a comic book store in Cambridge, right next to Boston, called The Million Year Picnic, so we looked in some of the nearby cities. We ended up renting a tiny storefront next to a magician supply store in Watertown, Massachusetts. I had a good feeling about this location because the first time I met with the landlord, he introduced me to the famous pulp author, Walter Gibson. Wow! If the author of The Shadow was wishing me good luck, how could we fail?!

We called our store Comic Relief. I agreed to pay $100.00 per month for rent and that included the heat. My only other expenses would be the electric bill and the phone bill. I called the electric company and they got me hooked up the next day. The phone company was a different story. Because I was new in the business world, the phone company insisted on a $100.00 deposit before they’d give me phone service. I refused to send them that much money for them to just hold. Consequently, I had no phone installed. This was my first big mistake. We bought some used store fixtures from some stores that were going out of business. We handed out flyers advertising the store at the monthly comic book conventions.

Now we needed the comic book inventory. We put our entire back issue inventory into the store but I knew that we’d need to find a source to get all of the weekly shipments of new comic books. The new comics buyers would be the customers who would come in to the store every week for the newest issues and then they’d hopefully buy some of our older comic books too. Back then, there was only one distributor servicing the “direct market” retailers like me. The distributor, Phil Seuling, had made a deal with Marvel Comics and DC Comics to buy comics directly from them at a big discount and then he’d resell the comics to the small retailers like me. The big comic companies liked the idea because these comics were being sold to Phil Seuling on a non-returnable basis. For over 30 years comic books had been sent to magazine and book distributors and whatever they couldn’t sell to the small retailers would be returned to the publishers for credit. In the early 1970’s, the comic book publishers would end up selling only one copy for every three or four that they printed. Now, through Phil Seuling, every copy ordered was a final sale. This was a much more profitable business for the publishers. Phil Seuling received 60% off of the cover price of the comic books and he would resell them to the small retailers like me for 40% off of the cover price.

Although we were happy to be able to get the new comics, there were some problems with dealing with Phil. He required pre-payment three months in advance for all of the orders. He also required us to order the comics in 25 issue increments. This was okay on a major title like The Amazing Spider-Man, but we certainly couldn’t sell 25 copies of Sgt. Fury or The Rawhide Kid. In order to be considered a full service comic book store we wanted to carry all of the comics published, so we started an account with Atlas News Distribution near the big city of Worcester Massachusetts. They wouldn’t take advanced orders for comics but for some reason they liked us and allowed us to dig through the stacks of new comics when they arrived and pick out anything we wanted to buy. We only got a 25 % discount off of the cover price, but we were allowed to return any unsold copies.

I was still working at my full time job so I couldn’t go to the distributor to pick out the comics. My wife and her mother would handle that for the store. My wife agreed to run the comic store Monday through Friday and I’d run it on Saturday. That was my second big mistake.

Next: Trouble in paradise.
Picture: Mal (after recent eye surgery) and I, shortly before we were married.
Posted by paul howley at 6:19 AM