My Life With Comic Books: Part 19 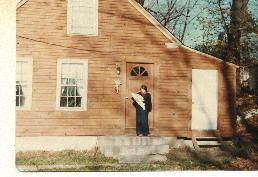 MY LIFE WITH COMIC BOOKS: THE HISTORY OF A COMIC SHOP - Part 19

In 1980 I began searching for a location to open my new comic book store. I lived in a small town and I was smart enough to know that I’d need a large customer base to make my store profitable so I started my search in the city of Worcester, Massachusetts. Worcester is the second largest city in all of New England and more importantly, there are ten colleges located there. There was already a comic book store in Worcester but I knew I could offer better customer service than he could.

I contacted a real estate agent and explained what I wanted. I would need at least 1000 square feet of retail space on a major road and it had to be cheap! He showed me around Worcester and the only location that I was interested in was at the edge of a “tough” neighborhood. The rent was only $350.00 a month but the realtor warned me not to rent this building. I liked the location. The store was on the third busiest road in the city and it was on a corner next to a traffic light. Every day, thousands of cars would be traveling past my store and many of them would be stopped at the traffic light looking into the side window of the store. The store didn’t have a parking lot nearby but it did have some parking spaces in the front on the street. At the time, I didn’t know how important adequate parking would be.

I offered to rent this storefront on a month-to-month basis. I didn’t want to sign a lease because I really wasn’t sure that this comic book store could be profitable. I knew that I had run out of space for our inventory in my small house. I could have rented some warehouse space in which to store the collectibles but this storefront was actually cheaper and I was hoping to recover most of the monthly expenses with some retail sales. The owner of the building agreed with my request and rented the storefront to me at the end of March of 1980.

Now that I was paying rent, I rushed to get the store ready to open. Many people would have moved slowly, planning carefully to do things right. Not me. I obtained the proper business licenses the day after I signed my rental agreement. I quickly put in an order for a huge shipment of new comic books and comic related books from Phil Seuling’s Seagate Distributors. I asked them to send me one copy of everything they had in stock. I knew it would be important to look as though the store was well stocked. I really didn’t need to have multiple copies of books--just lots of different books. I had the electricity, gas heat, and telephone turned on within two days. I made signs out of poster board. I bought a bunch of used banquet tables on which to put most of my inventory. I bought two used comic book “spinner” racks from an old drugstore. No fancy displays. No cash register. We decided to call the store “That’s Entertainment”. I ran a small classified advertisement in a local “penny saver” magazine that cost me one dollar. I was open for business on April 15th, 1980.

Because I still planned to set up at local baseball card shows, and they were usually held on Sundays, I decided to be open Tuesday through Saturday from 10:00AM to 6:00PM. This would allow me time to sell our baseball cards on Sundays and have every Monday off. I spent most of the first day moving stock from place to place trying to make this store look organized.

My first customer came in around 2:00PM. He was on his way to my competitor’s store and he was surprised to stumble across my new store. He told me how much he disliked shopping at the other store, but until today, he had no choice. He spent about an hour looking around my store and spent a little bit of money. He promised to help spread the word about “That’s Entertainment”. By the end of our second day we had made enough money to pay all of our first month’s expenses!

I knew it would be important to quickly establish “repeat” customers so I offered a subscription service. I printed a list of every comic book that was being published and asked each new customer to check off the comic books they’d like me to save for them each month. We got new shipments of comic books each week and by using this free service the customers would be certain to get every comic book they enjoyed. It also helped me because I knew in advance how many copies of each comic book to order so that I wouldn’t get stuck with unwanted inventory. My customers were assured that they wouldn’t miss an issue of their favorite comics.

By word of mouth, it became known throughout the small comic book collector “world” that shopping in my store was more pleasant. Each day, new customers would find us. Sales rose almost every week. My partner, Jay, convinced me that I was needed at the big summer Creation Comic Book Convention in New York City. I decided to combine this trip with a big family camping trip and closed the store for five days. My parents and siblings, Mal, Adam and I went to a campground in Rhode Island for a few days before the comic book show.

I then met Jay in New York while Mal and Adam drove home without me. When Mal arrived at home she discovered that someone had broken into our house. The thief stole money, jewelry, our stereo, and more. Mal quickly called my sister, Sharon, and her husband, Greg, to come to be with her until I could get there from New York. When I got the phone call from Mal about the break-in, she did not yet know what had been stolen. She just needed me to be there with her so I jumped on a bus and rode for five hours to get home.

During this long ride, I’d imagined that the thief could have stolen the thousands of dollars worth of baseball cards that I had stored in my home office. The crook could have still been in the area. Even though my relatives were there with them, I was concerned about the safety of my family. This was many years before there were cell phones and I really just wanted to be able to talk with my wife to assure her that things would be okay. But I couldn’t. This was the last comic book show that I’d ever go to without my family!

Next chapter: I catch the crook.

Picture: Our run-down home in Sterling, Massachusetts AFTER we fixed it up!
Posted by paul howley at 6:20 AM