My Life With Comic Books: Part # 9 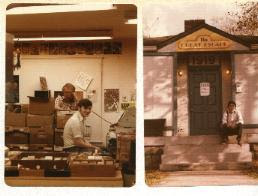 MY LIFE WITH COMIC BOOKS: THE HISTORY OF A COMIC SHOP - Part Nine

I arrived at this small comic book convention in Chattanooga, Tennessee really early so that I could convince the organizer to let me have the best space in the room. I learned from my experiences in Boston that the tables closest to the entrance were the best because many collectors would spend their money on comic books as soon as they saw the issues they wanted. If you were set up far away from the door, the collectors were frequently out of spending money before they got to you. Unfortunately, this organizer had already assigned the tables to specific sellers and since I booked the show late, I had a table tucked into a corner. I set up my small display of early Spider-Man comics and covered the whole table with a thick clear plastic sheet so that the collectors could see the comics I had for sale but couldn’t steal them. In the mid 1970’s, this was a common practice.

I was the first comic dealer set up at this show. I watched with curiosity as the dealers from the southern states showed up to set up their displays. Many of them arrived late and seemed to move quite slowly. This surprised me because the show was opening within an hour and it didn’t look as if they would be ready. There was one dealer who stood out from the rest, however. He was an older man (in his late 40’s) with graying hair, was a little heavy, and he was working so hard that he was actually sweating! I watched as he brought in load after load of “chicken boxes” full of comic books. Chicken boxes were thick cardboard boxes that were covered in wax. Chicken companies like Weaver and Tyson used them to ship their product to the supermarkets. The southern comic dealers would get these boxes from the supermarkets, wash them out, and stored comic books in them. You could fit two rows of about 150 comics in each box.. This hard working comic book dealer carried far more boxes of comics than he’d ever be able to display in his small booth. He set up his display and put the extra comic books under his tables. He was the only dealer in the room smart enough to realize the value of using all of the available space to display merchandise and maintain some extra stock to replace comics that sell quickly. He also kept some low demand comics under the tables just in case someone asked for them.

His energy and his attention to detail impressed me. He worked hard to locate the comic book that each collector was looking for in his large assortment of comics. I was also impressed because other than me, he was the last dealer to pack up his comics at the end of the show. He was there to sell comic books and he’d stay until the last collector was finished spending. That was my intention also. When the show was completely over, I approached him and introduced myself. His name was Gary Walker from Nashville, Tennessee. I told him that I was looking for a job in the area. We really liked Tennessee and figured we could work here for a while and eventually get around to work in Disney World. I explained that I’d like a job in “shipping and receiving” at a big company, since that was my past job experience. Gary politely said he didn’t know of any job openings in that field.

Then, almost as an afterthought, I mentioned that I had owned a comic book store for a while. Gary was surprised. He had been seriously considering opening a comic book store of his own in Nashville. He invited Mal and I to come to Nashville to work for him and that sounded good to us. Early that next week, we packed up our suitcases and drove to Nashville. We stayed in a motel for a short time while we began working with Gary. Gary was married to Peggy and they had two children. Greg was in his late teens and Karen was about 14 years old. In a very brief time, we found that we were really welcomed into his family. Mal enjoyed spending time with Karen while I worked with Gary, sorting comic books. It wasn’t long before we started sleeping and eating at the Walker’s home. It was a nice place to work.

After a couple of weeks, Gary made me an offer of full time employment. I think it was for $125.00 a week, with no benefits. It wasn’t great money, but I really liked the environment: comic books, friendly people, no snow. Best of all, I got to spend a lot of time with Mal. Gary ended up with a really good deal. He basically got the two of us for one small paycheck.

Mal and I went back to Massachusetts, packed up all of our belongings, rented a truck and moved to Tennessee. Our relatives and friends were sad to see us move away, but they understood and most were very supportive. As we drove away from my parent’s home, Mal cried. This was really a big move for us to take. We probably wouldn’t see our relatives and friends again for quite a long time. I don’t remember being sad. I only remember the excitement of beginning a new adventure. Looking back, I wonder how my Dad felt; his oldest child was moving far away for the first time. Did he think I was crazy? All I remember is that he had a positive attitude about my life’s plans. I’d tell him these crazy ideas and he’d ask me if I’d thought them through. He would then urge me to go after my dreams. He’d say, “Do it now before you have kids.” So now we were headed to Nashville!

Before Gary Walker opened his store, his main source of comic book income came from setting up at big flea markets. Once each month he would set up in Nashville, Indianapolis, and Louisville. These required a lot of preparation. We would stock the chicken boxes full of comics, load his truck, drive to the flea market, set up, and then work hard to sell the right comic books to the eager collectors. Gary taught me a very important lesson. He would be sure to get the names and addresses of as many comic book customers as he could. About a week before each flea market we would send a postcard to everyone on our mailing list to remind them that we’d be coming to town. Collectors appreciated the “personal invitation” to see our new comic book stock and they would be sure to stop at our booth each month. It became very clear to me how important a mailing list is for small businesses.

Although the flea markets were Gary’s “bread and butter”, we were all looking forward to opening a comic book store. It didn’t take too long for Gary to find a small building for rent on the edge of “Music Row” in downtown Nashville. Now, many of you only think of Nashville as a town of barefoot country folk, corncob pipes, and yodeling. Well it wasn’t that way at all! In 1976, Nashville was a large city full of all types of music and culture. Gary’s first comic book store was located within walking distance of Vanderbilt University…a world-class university. I was amazed at the vast array of different college students who became customers. We had students from all around the world shopping at our store.

One of the first things we had to do was come up with a name for the store. Gary ran a contest at the flea markets and encouraged our customers to submit their ideas for our new name. During dinner at the Walker’s home one night, we all started suggesting possible names for the store. Mal just started saying all kinds of strange combinations of words until she hit on a name that we all agreed would be perfect. “The Great Escape!” That was what the comic book hobby really was…a great escape from the pressures and trials of real life. Gary and Peggy gave Mal a check for her creativity and “The Great Escape” opened for business.

Next Chapter: We settle in…but not for long.
Pictures: Our boss, Gary Walker.
Mal sitting outside of The Great Escape.
Posted by paul howley at 6:40 AM