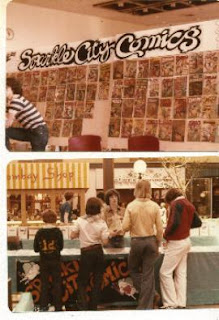 MY LIFE WITH COMIC BOOKS: THE HISTORY OF A COMIC SHOP - Part Eleven

We accepted the offer of Jay Maybruck to work for him in Dayton, Ohio, and said good-bye to all of our friends in Nashville including Ray and Virginia Sawyer, Gary and Peggy Walker, Greg and Karen Walker, Cliff Furline, Bill Mullins, Lonnie Cummins, and dozens more. We sold our house, loaded up the rental truck and rented a townhouse apartment in Huber Heights, Ohio, just down the street from my new boss. Jay was a single guy about a year or two older than I was. He was formerly a schoolteacher, but the prospect of making huge money drew him into the rapidly growing comic book business.

At the time that I accepted his employment offer, Jay had one of the best inventories of valuable old comics I had encountered. I was eager to be associated with such an impressive company.

Jay taught me how important “image” is for a business. He wanted to be perceived as the biggest comic book dealer in the country. He named his business “Sparkle City Comics” and was one of the first comic book dealers to develop a recognizable character logo that would be used in all of his advertising. For some reason, Jay used sheep and a Shepherd named “Hans, The Herder” as his company’s pitchman. At comic book conventions, our large comic book display racks featured full color paintings of lots of cute sheep dancing and being silly. I know it probably sounds stupid, but this tactic really worked! We were recognized at every show we went to because of these sheep.

We were also in a position at almost every major convention that made it impossible to miss us. Jay made a deal with the owners of America’s biggest convention organizer, Creation Conventions, to buy ten full table spaces at every show they put on! The normal cost of these table spaces was about $150.00 per table, but Jay agreed to pay for a full years worth of spaces in advance at a greatly reduced cost of $50.00 per table. This helped the convention owners to have up-front working capital and it gave Jay the best location at each convention and saved him a ton of money over the year in table fees. Because we had the best display locations at these shows, the collectors would spend most of their money with us. Just as importantly, many collectors would offer us any comic books that they wanted to sell. We could pay a fair price (usually higher then any other dealer) because we were confident that we could sell the comics to other collectors very quickly. Sometimes the comic books would re-sell within minutes of our purchasing them!

At a convention in New York City, a collector sold us a complete run of Marvel Mystery Comics #1-10 (from 1939-1940) for $12,000.00. We sold the entire group to a collector from England for $19,000.00 about twenty minutes later. Our great locations, strong inventory, and available cash for purchasing comic books enabled us to dominate the national convention market. Our competition didn’t like us but the comic book collectors loved us.

When I say “us”, I really mean Sparkle City Comics. Jay was the owner and I was just an employee who was paid a weekly salary. Although Jay knew I was very good at “the comic business”, he didn’t follow through on his original promises. I did earn the base salary of $17,000.00 per year, but I never received the percentage of our growing mail order business. I was promised that I’d only have to work one weekend each month, but the schedule was actually much different. We would stock our comic book inventory on Wednesdays, load up Jay’s van on Thursday, drive Thursday night, arrive at most shows by Friday afternoon, set up our huge display on Friday and usually work until midnight buying and selling with the other dealers. The show would open on Saturday morning and we’d sell to the collectors until the show closed at around 8:00 PM. We would go back to our hotel room and “process” the comic books that we had bought during the show so they’d be ready to sell first thing in the morning on Sunday. We would sell comics all day Sunday and then take down our display at around 6:00 PM, would load the van and drive Sunday night through Monday night to get back to Ohio. Tuesday we would unload the van. Mal would do the laundry while Jay and I restocked the comics on Wednesday and then we’d start again on Thursday. We attended forty-two comic book shows that year!

Although it was hard work and very long hours, I enjoyed it for a few reasons. I got to be with my wife, Mal, almost all of the time because she always traveled with us. Jay always traveled in style. We ate at nice restaurants and stayed at decent hotels. This time in my life was also very fast paced and exciting. We became known all over the United States. We became comic book “celebrities” in a way. We also became trendsetters and market makers.

Next chapter: My knowledge and love of comic books creates hot trends in the market.
Posted by paul howley at 5:57 AM